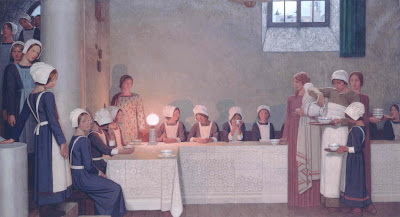 ACTS OF MERCY is the collective title of four large oil paintings on canvas painted by Frederick Cayley Robinson (1862-1927) between 1915 and 1920 for the Middlesex Hospital in London. They had been commissioned for the hospital around 1912 by the Australian-born mining tycoon and art-lover Edmund (later Sir Edmund) Davis (1861-1939).

UCLH and the Wellcome Trust, with the aid of Tate and The Art Fund, have been in discussion to ensure that these works be retained for the public benefit, as Edmund Davis intended. Tate offered to safeguard the paintings while discussions about finding a permanent location proceeded. Each of the canvases measures approximately 200 x 340 cm. (6 ½ x 11 feet).

The Wellcome Trust has agreed to buy the four paintings for £235,000 and display two of them at any one time on the large walls in the entrance hall of the Wellcome Library. The other pair will be kept in the Library’s storage facilities where they can also be viewed on request. There they will join more than 1,200 oil paintings and other works collected by the founder of the Wellcome Library, Henry S. Wellcome (1853-1936).

The four canvases form two pairs. One of the pairs shows orphans and the other shows medical patients, reflecting the social and clinical roles of hospitals respectively. In the former pair (one of which is reproduced above), orphan girls are receiving sustenance and upbringing. In the latter pair, patients including soldiers injured in World War I gather at the entrance to the hospital. The paintings will be on public display in the Wellcome Library from March 2009.