The after-effects of Vril 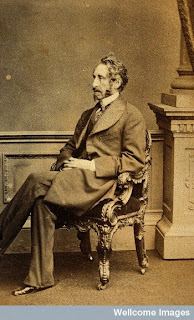 Dr Lesley Hall of the Wellcome Library was one of the contributors to a recent BBC Radio 3 documentary discussing the curious afterlife of Edward Bulwer Lytton’s Vril.

Matthew Sweet finds out about Vril, the infinitely powerful energy source of the species of superhumans which featured in Victorian author and politician Edward Bulwer Lytton’s pioneering science fiction novel ‘The Coming Race’. Although it was completely fictional, many people were desperate to believe it really existed and had the power to transform their lives.

One of these people was a Harley Street doctor, Herbert Tibbits, who along with a handful of aristocrats, tried to promote the notion of electrical cures and the possibility of a “coming race” in a bizarre bazaar at the Royal Albert Hall.

Another believer was Arthur Lovell. In the documentary, Dr Hall describes his work The Breath of Life, which claimed to offer practical advice on how to breathe your way to a higher state of human evolution.

The Wellcome Library holds a copy of this book, and other works by both Tibbits and Lovell. The documentary is available here until 11 January 2009.