Where does it come from?

Provenance is one of the most frequent subjects of questions sent to the Wellcome Library: where did the Library get a particular item from? Sometimes the names of previous owners are in the catalogue record, but in a field which is only visible behind the scenes, not in the public form of the Wellcome Library catalogue. More often however, the provenance of a given item is not in the computer catalogue at all but is buried somewhere within a huge archive of auction catalogues, dealer’s catalogues, registers, catalogue cards, scrawled on the folders and slips of paper filed with the item, or implicit in the item’s inclusion in a batch of documents all with the same provenance. 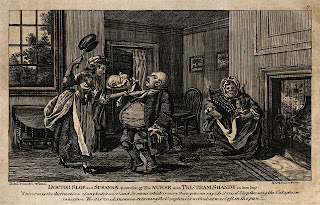 Sometimes however we strike lucky. The Wellcome Library has a set of “prints representing the most interesting sentimental and humorous scenes” in Laurence Sterne’s novel Tristram Shandy, published in Dublin by William Allen (fl. 1787-ca. 1820).

A previous owner has written on the versos of the Wellcome Library prints the precious details of his acquisition:
“Ja[me]s Knight his picture bought it at Nath[anie]l Greacens Printer on the 10th day of July 1805 Monaghan”. Click on the image below for a larger view. 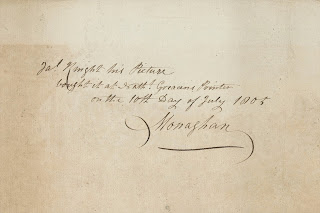 A couple of surprising points: first, he calls the engraving “his picture”, indicating indifference to the fact that it was an engraving, and secondly, that he bought it from the printing establishment of Nat Greacen in Monaghan town, presumably because Greacen was acting as an agent of William Allen’s in the north of Ireland. Greacen’s building in Monaghan later became well-known as a hotel and pub, but, as one of the favourite Protestant watering-holes in the town, it was badly damaged in the IRA bombing of 17 May 1974, after which it closed for business and reopened later as a bank.

So the Library catalogue could, if we can get the provenance to display properly, provide useful information for such subjects as the fame of Sterne’s Dr Slop, the selling and buying of prints in Georgian Ireland, and the waves of movements of documents which underly those collections which happen to exist today.

One Response to Where does it come from?