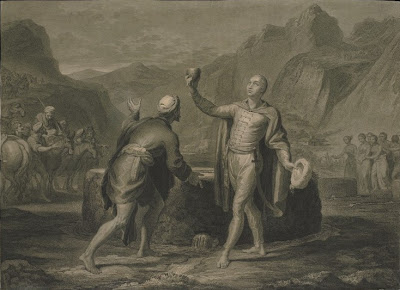 A toast in Abyssinia. Wellcome Library no. 667946i

It could be said without fear of contradiction that wherever you are in the Wellcome Library you are never more then ten feet away from a reference to Aristotle, the Virgin Mary, Queen Victoria or the River Nile. The Nile features in many roles: as the channel whose flooding fed the civilization of the ancient Egyptians; as the waters which supported the infant Moses and thus enabled the exodus of the Jews from Egypt with momentous consequences; as a place for research into schistosomiasis with the aid of a floating laboratory commissioned by Henry S. Wellcome; or more frivolously as the holiday resort of Europeans and North Americans such as Florence Nightingale, the Prince of Wales, William Osler, and the many others who enjoyed the views from the Nile dahabeeyahs.

Many references involve the obsession with finding “the” source of the Nile, exemplified in the Victorian expeditions of Sir Samuel Baker, and John Hanning Speke. There were however earlier explorers of the source of the Nile, one of the most distinctive being James Bruce of Kinnaird (1730–1794), whose many massive volumes Travels to discover the source of the Nile in the years 1768–73 (1790) weigh heavily on the Library’s shelves. Their pages record the political and tribal history as well as the fauna, flora, and natural features of the regions which Bruce, disguised as a Syrian savant and physician, passed through in his quest for the fons et origo of the river. They also include a report on the Abyssinian custom of eating raw beef cut from living cattle.

Among the Bruce of Kinnaird documents in the Wellcome Library is an unusually large etching (above). It shows Bruce at his moment of triumph in November 1770, when he and his Greek assistant Strates reach a fountain at Gisha in Abyssinia, regarded by the locals as the sole source of the Nile. Bruce described it as “an island of green turf which was in the form of an altar … I stood in rapture over the principal fountain which rises in the middle of it”. To mark the occasion, Bruce and Strates raise a coconut to drink the Nile water to the health of King George III of Great Britain and to Empress Catherine the Great of Russia (the champion of the Greeks against the Ottomans).

The print must be exceptionally rare, for it is mentioned neither among the likenesses in Bruce’s Oxford Dictionary of National Biography entry nor in the recent biography of Bruce by Miles Bredin, which does however describe the episode [1]. Another impression in the British Museum bears lettering which records the date 1793 and the names of the authors: the composition was attributed to Richard Morton Paye (1750-1821), and the etching to none other than James Gillray (1756–1815), the well-known caricaturist. In support of that surprising attribution, the fuzzy etched lineation is similar to Gillray’s caricatures: a specialist history engraver would have used bolder and thicker lines to differentiate between the principal figures and the background. It is nevertheless strange that this work is not included in Thomas Wright’s list of works by Gillray “not belonging to the province of caricature or satire” [2].

This heroic history picture of the Scottish explorer at his moment of glory in Africa must be one of Gillray’s least-known works. It deserves to be drawn to the attention of historians of Nile exploration, matters Abyssinian, and Scotland.

[2] Thomas Wright, The works of James Gillray, the caricaturist, London: Chatto and Windus, 1873, appendix pp. 372-374, ‘Works, not belonging to the province of caricature or satire, executed by James Gillray as an engraver’