Running aground in Haiti and in cyberspace 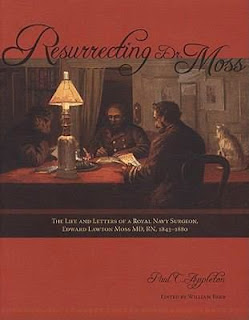 The Wellcome Library has just acquired a monograph by the late Paul C. Appleton, Resurrecting Dr. Moss [1]. It is a biography of a short-lived Dublin-born naval surgeon Edward Lawton Moss (1843-1880), who spent much of his brief career in foreign waters—Atlantic, Pacific, and Mediterranean, with a period on land running the Esquimalt hospital on Vancouver Island, British Columbia (1872-1875). Moss was the medic on the British Arctic expedition of 1875-6, which was cut short by scurvy, and about which Moss wrote and illustrated Shores of the Polar sea (1878: currently the firm of Henry Sotheran is offering a copy of this book for £3,500). In 1878 Moss was in the Dardanelles on the fringes of the Russo-Turkish war of the time. In 1880 he was one of 280 men on HMS Atalanta who disappeared without trace off Bermuda.

In addition to telling the story of Moss’s life through his letters (in British Columbia archives) and paintings (still with his descendants), Mr Appleton has clarified an early episode in Moss’s career and thereby explained a hitherto puzzling document in the Wellcome Library. This episode is called the Bulldog Affair, and the document is a painting by Moss.

HMS Bulldog was Moss’s first ship. In 1865 it was patrolling the seas around Haiti, trying gunboat diplomacy on the rebels warring against the Haitian government of the day. The commander noticed that a British merchant steamer RMS Jamaica Packet was being harried by an armed warship controlled by the rebels, and went towards the coast to protect it. Unfortunately Bulldog then itself ran aground on a coral reef. Unable to move, it was a sitting target for the rebels. The Bulldog crew lived up to the name of their ship and defended themselves vigorously with the artillery available. A bitter battle ensued. Edward Lawton Moss, aged 22, was the surgeon on board: he had to perform two amputations on the day of the battle. Four of his patients died after surgery, and a further five men were injured. The surviving Bulldog crew eventually made for the boats, in order to row along the coast to a part of the island under the government’s control. On leaving the ship at 11.30 pm on 23 October 1865, the captain lit a fuse, and a few minutes later Bulldog was blown out of the water. On their return to London the commander and navigator of the Bulldog were submitted to a court-martial and reprimanded. Appleton found evidence that the Jamaica Packet was not as innocent as the officer claimed, as it was gun-running for the government. 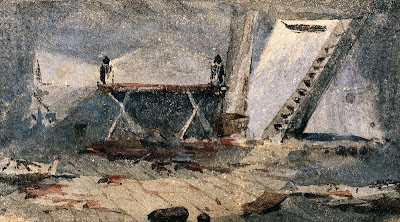 It is a tiny watercolour (6 x 11 cm.), on the mount of which is inscribed “The surgery, H.M.S. Bulldog. Cape Haitien 23rd Oct 1865. E.L. Moss M.D. R.N. “. Its provenance is currently unknown, but it has been in the Wellcome Library at least since the 1930s, and it was at one time in Liverpool (it is framed and the backing sheet bears the frame-maker’s label of Richard Jeffreys, 88 Bold Street, Liverpool, tel. 5231 Royal).

At first sight it looks like a depiction of a couple of tents in the open air. However, in the light of Appleton’s narrative, one can see that it is Moss’s operating room below deck on HMS Bulldog. On the right is a ladder leading up to the hatch, through which light floods down from the deck above. On the left is the operating table, with supports at either end to secure the patients whose limbs Moss had amputated. On the floor is a ghastly quantity of blood. On the ground on the right are three cannon-balls, and a fourth is in the foreground. Moss can hardly have painted this in the thick of battle: he must have done so while waiting nervously for the “Abandon ship”, in the knowledge that, a few hours later, the site he was recording would be blown to smithereens.

What a pity that the late Paul Appleton never knew about this painting, which he surely would have used had he known about it. If he ever used Google or similar search-engines, they would not have helped him, for they cannot search databases. There is a vast amount of data needed by researchers that is inaccessible in the “hidden web”. That information includes the entire contents of Wellcome Library’s web-catalogue –-over 600,000 records, one of which is for this painting.

Thanks to the network of publishers and booksellers, Mr Appleton’s analog book has done a better job of making Moss’s story known to the Wellcome Library in London than the Wellcome Library’s digital catalogue has done of making the London painting known to Mr Appleton and his publishers and editor in Calgary. We can only look forward to the day when, for the benefit of Mr Appleton’s successors, that relationship is levelled. Blogs such as this one are already helping. Meanwhile the book is highly recommended; apart from its content, its attractive design makes it a pleasure to peruse.