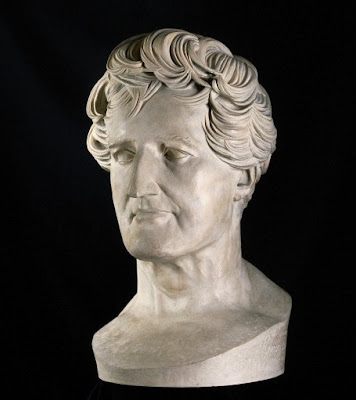 In the Wellcome Trust’s headquarters, this colossal bust of Georges Cuvier stands in the atrium outside a meeting room called the Darwin Room. The irony of that conjuncture may be lost on many of the people who use the meeting room. If so, they will be in a good position to appreciate it after listening to a talk by Dr Andrew Cunningham of Cambridge University on the connections between French and English evolutionary thought, to be broadcast on BBC Radio 3 on Sunday evening (8 February 2009) at 9.30 pm London time.

Were European researchers thinking along the same lines as Darwin, or were they following separate paths of enquiry? What impact did the intellectual environment of post-revolutionary France have on their scientific theories of animal development? And what role did Cuvier play in the events? Tune in on Sunday evening.