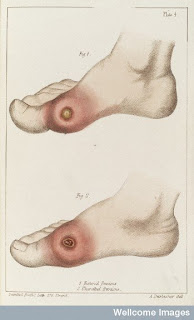 We recently brought you news on ‘The Patterson Challenge’ – a proposed 20 mile walk across London, which would follow in the footsteps of James Patterson, a Victorian tourist, who had recorded his perambulations in a diary now in the Wellcome Library.

The walk was attempted on Sunday 1st February and, even despite blizzard snows on the last leg, 8 hardy souls managed to complete the gruelling route, winding their way as Patterson had done, from Camden to Fenchurch Street via Greenwich…

On completion, the walkers marvelled at the fitness of Patterson and the obduracy of his footwear. They had also seen at first hand how much – but also at times how little – London had changed over the last 150 years.

A summary of the walk has now been posted on Londonist, the website about London which was inspired to undertake the challenge. James Patterson – and the ‘Patterson challengers’ – we salute you!