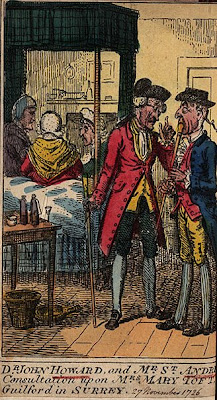 The Library holds a comprehensive collection of early printed works concerning the notorious case of Mary Toft, a woman who claimed to give birth to rabbits. Around 22 18th century pamphlets and books have been scanned cover to cover and are now available via the Library catalogue.

In November 1726, a woman named Mary Toft was at the center of a public debate that included some eminent physicians of the day. Mary Toft became known as the Surrey Rabbit Breeder, based on the account that after a series of miscarriages, she began to give birth to rabbits. This continued in the presence of a Swiss anatomist connected with the court of George I, Nathanael St. Andre. St. Andre published A Short Narrative of an Extraordinary Delivery of Rabbets, and other pamphlets and broadsides followed. Toft came to London, where, after the 17th rabbit ‘birth’, many became convinced the matter was a hoax. Toft then confessed and St. Andre apologized.

The Library holds the key texts on the case, representing the views of both those who defended Mary’s claims and her sceptics. In particular is a volume (EPB T.347) assembled around 1851 by Edward Hawkins, keeper in the British Museum’s department of antiquities. It contains a number of original pamphlets as well as manuscript copies of others, made by Hawkins. The Library also holds a Hogarth print of Mary Toft giving birth to the rabbits.

There are a number of other similar volumes put together in the 19th century, one at the Royal Society of Medicine and another in the Osler Library at McGill University, Montreal.

2 comments on An Extraordinary Delivery of Rabbets: see the Mary Toft collection online