God’s face in the clouds 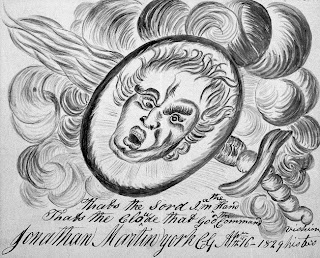 One hundred and eighty years ago, on 31st March 1829, a York tanner and preacher (and occasional artist) named Jonathan Martin was on trial for his life. Some eight weeks previously, on 1st February, Martin had hidden himself in York Minster after evensong and set light to the building, causing massive damage to the woodwork of the building including the roof of the choir and the organ. Arson on this scale could carry the death penalty.

This was the culmination of a career of fanatical and eccentric behaviour. Martin was born in the North-East in 1782 and brought up in part by his grandmother, whose Protestantism was of an extreme, hellfire variety; his traumatic childhood also included witnessing the murder of his sister. His younger brother was John Martin, later famous as the painter of huge apocalyptic visions. After some years in the navy, around 1810 when he returned to life on shore, he began to experience violent and marvellous dreams, and in 1814 he experienced a religious conversion, joined the Wesleyan Methodist Connexion and became violently opposed to the Church of England. This period of his life culminated in 1817 with his threatening to kill the Bishop of Oxford and being sent to an asylum. Here he began to paint again, showing what a witness at his trial called “extraordinary marks of uninstructed talent, mixed with frenzy and wildness”. He escaped in 1821 and based himself in York, where the Wesleyan Connexion disowned him and the Primitive Methodists soon banned him from meetings: he was becoming a one-man sect. During the latter part of 1828 and the early weeks of 1829 his behaviour became more and more extreme, including hanging threatening placards on the railings of the Minster, but the warning signs were missed and it was only after the arson attack in February that he was arrested.

On March 31st the judge found Martin not guilty on the grounds of insanity – reversing the verdict of the jury – and committed him to an asylum. Here, a couple of weeks later, Martin drew an image of God’s face and a sword in the clouds, attempting to record two of his religious visions: a document now held in the Wellcome Library’s archives collection as MS.7312/17. This time there was to be no escape and he died in St Mary’s Hospital, London, in 1838.

His younger brother, John Martin, has already been mentioned. Eccentricity ran in the family: their elder brother William Martin became a poet and self-styled philosopher notable for his violent opposition to modern science, Newton being a particular bugbear. Ironically, he was almost as fervent in his support for the Church of England and his opposition to dissent as his younger brother was on the opposite side. Some items related to this self-styled “philosophical conquerer of all nations” are also held in the Library, as MS.7312/18. A witness to the elder Martin’s career described him as “perfectly cracked but harmless”; sadly this could not be said of Jonathan.