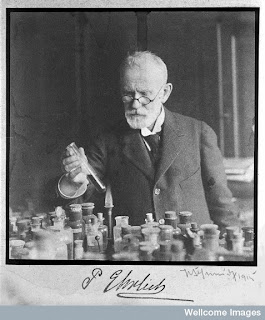 Paul Ehrlich (1854-1915) was a leading medical researcher of the late nineteenth and early twentieth centuries particularly famed for his work in bacteriology and immunology. He won the Nobel Prize for Medicine in 1908. He is best remembered for ‘Dr Ehrlich’s Magic Bullet‘, Compound 606, the arsephanemine drug salvarsan discovered in 1909, which provided a cure for syphilis,.

Shortly after the Second World War, Gunther Schwerin, one of his grandsons, located Ehrlich’s copybooks in Germany, and sent them, along with other material, to the Wellcome Historical Medical Museum in London for safekeeping. While they were there, his former secretary Martha Marquardt, who was also his biographer, and the co-editor of the four volumes of his collected papers, one of the few people able to read his handwriting, prepared seven sets of typewritten transcripts. These carbons are the 3rd set (of 4) copies, formerly in the possession of Sir Henry Dale, and presented by him to the Library early in 1958. The originals, and 3 sets of copies, are now held with the Paul Ehrlich archive in the Rockefeller Archive Center, New York, by whose kind permission this particular set of copies is made available in the Wellcome Library

There are 6 series, representing both copies of letters sent by him, and experimental notebooks. There are not complete sets of transcripts for all of these: in some cases the originals themselves appear to no longer exist. According to a letter from Dr E A Underwood, Director of the Wellcome Historical Medical Museum, to Gunther Schwerin, 25 Mar 1963 (WA/HMM/CO/Eau/13), there are some misreadings by Marquardt of scientific terms in the originals, as, although she was capable of deciphering Ehrlich’s writing, she was not herself a scientist.

Ehrlich’s name is one of those on the frieze of names of the most distinguished figures in medical science, created in 1913 for the Wellcome Historical Medical Museum when it was based in Wigmore Street. The frieze is now viewable around the gallery of the Wellcome Library Reading Room at 183 Euston Road