In the wake of the ‘Frankenstein science’ fears stirred up by last year’s Human Fertilisation and Embryology Bill, startling evidence has come to light of a strange hybrid organism genetically engineered in the USA.

A newly-catalogued file in Francis Crick’s archive reveals the existence of Kameelman, a chameleon-human clone created by the ‘evil fertility specialist’ Dr Gor Menchin. Kameelman’s chameleon DNA gives him the power to ‘metamorph bodily characteristics to resemble a different person’. But don’t panic! Kameelman is not a megalomaniac hellbent on destruction but a teenager ‘on a mission to fight social injustice through peer-to-peer mentoring’. 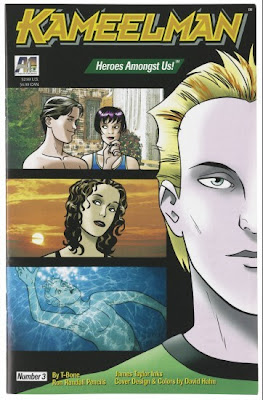 Crick received issues 1-3 of the comic book Kameelman in 2003 along with a request to write the foreword for a book version. On the face if it an unlikely publication to turn up in an eminent scientist’s papers, Kameelman is just one in a bewildering torrent of unusual requests sent to Crick over his career.

Back in 1994, for example, he was offered literary immortality by the science fiction writer Jack McDevitt, who sought Crick’s permission to write him a cameo role in Ancient Shores, his novel about a stargate in North Dakota.

Despite his extrovert personality, Crick was publicity shy and fiercely protective of his own personal ‘brand’ – unlike, in his view, James Watson, his co-discoverer of the structure of DNA. He was also no fan of science fiction. It is no surprise then that he refused McDevitt’s invitation – nor that he slyly suggested instead ‘Why not ask Jim Watson?’.

Kameelman clearly draws on a long science fiction lineage of human/animal hybrids, but the comic also taps into contemporary fears about assisted fertility, genetic research and violence between young people. As for the merits of its graphics and storylines, connoisseurs of the genre have plenty to say – see, for example, TheFourthRail on Kameelman’s ‘help-line altruism meets super-heroics’.

In the end Kameelman fails to tempt Crick into the world of graphic novels. But the very request reflects the power of Crick’s public persona. 50 years after his and Watson’s ground-breaking discovery in 1953, supplicants still came to him in the hope that some of his greatness would rub off on them.

For more information on the Crick archive please see the Archives and Manuscripts catalogue.