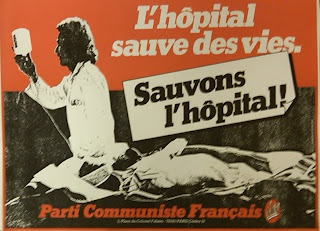 The Wellcome Library catalogue of prints, photographs, paintings and drawings, and of iconographic documents in general, reached its 65,000th entry today. The numbers are assigned by the computer as the records are made, so there is no particular significance in the item to which this round number was allotted, but it happened to be a propaganda poster issued by the French Communist Party in 1979 protesting against cuts in hospital budgets. Yes, even back then in the days of Valéry Giscard d’Estaing people were complaining about health care budgets.

Record number 1 was created on 21 October 1991. There are still plenty of works to be added to the catalogue from the Wellcome Library collection bequeathed by Henry S. Wellcome in 1936, not to mention new accessions, and new records are being added to the catalogue every day. A rolling list of the new accessions is available: today they include Chinese and German posters on public health, and American press photographs of media events from the past. New records for items already in the Wellcome Library are listed as they are added to the catalogue: they currently feature AIDS posters purchased in 1999 and some remarkable English 18th-century mezzotints.