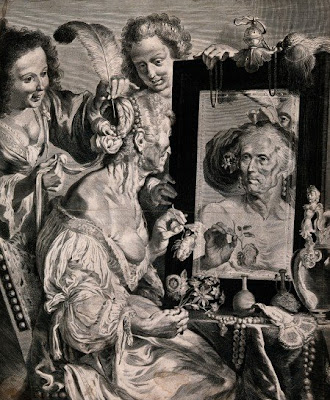 Etching by Jeremiasz Falck after Bernardo Strozzi. Wellcome Library no. 35207i

Bernardo Strozzi (1581-1644) of Genoa was a painter whose works include this portrayal of an old lady sitting at her dressing table, assisted by two slightly mocking younger women. One of the carers holds upright the heavily-framed mirror while the other sticks a feather in the lady’s hair. Strozzi’s oil painting of this subject is now in the Pushkin Museum in Moscow, but in the seventeenth century it was owned by the Reynst brothers in Amsterdam. There it was recorded in this etching attributed to the engraver Jeremiasz Falck (1619-1677) from Gdansk, who sometimes worked in Amsterdam [1].

Falck’s print has been discussed as a representation of “the lustful old woman”, a type identified in terms of humoral physiology [2]. Women’s bodies were phlegmatic because they were cold and wet, whereas men’s were choleric because they were hot and dry. In later life, women became either colder or drier, leading them to become “merry widows”. While it would be anachronistic to label her “osteoporotic”, how appropriate is it even to label her using terms from specialist medical books of her time? Let’s come back to this question after considering the life of Bernardo Strozzi.

Strozzi had two occupations: he was both a professional painter and a Capuchin friar. In 1625-1626 this unusual combination brought him into the courts, where he was accused of conduct unbecoming his religious status. His main defense was that he was painting not to acquire riches –- the Capuchins were a mendicant order –- but to support yet a third role in his life, which was as breadwinner for his aged mother and his impoverished sister Ginetta.

An article published in January 2009 reveals new documents in the Genoa archives about Father Bernardo’s complicated life [3]. They show that, four years after the trial, Strozzi was still trying to exculpate himself, for he arranged for four witnesses to testify for him before a notary on 8 May 1630. They testified that Bernardo, having obtained temporary exemption from his duties with the Capuchins, was in too poor a state of health to return to them, and still needed to support his relatives by painting.

The third and fourth witnesses were both physicians, and a paraphrase of the newly discovered documents follows. First, Giovanni Agostino Balbano, who had already given evidence for Bernardo in 1625-1626, now stated that he had known Reverend Father Bernardo and been his medical adviser for about 16 years, and had treated him in his infirmities, and knew that he was of weak constitution; that in entering a strict religious order he would not be able to persevere in it, and his life would be curtailed. Moreover he had been found to have an illness of the left leg in the form of a huge varicose vein which increased the gravity of his state of health. Moreover Balbano continued, Ginetta, the sister of Father Bernardo, had also long been in a very bad state of health, and was heading towards a chronic incurable wasting state (etica). He added that Ginetta (who was married, but to a husband who did not provide for her) had a son of four years old who was virtually blind.

Then in the evening the fourth and last witness testified: he was Giovanni Battista Schratino, Doctor of Arts and Medicine. He declared that he had visited Strozzi earlier that day, and found that he was troubled with a flux of phlegmatic and melancholy humours in the left thigh and leg, which was manifested in a lesion formed by a very large dilatation of the veins of the whole leg and part of the thigh, so that the limb was damaged by a sore which had not been cured. And if it was not cured, and particularly if greater exercise and movement occurred, it would cause many lesions, incurable ones at that, even more so if he entered a strict order like the Capuchins or similar, who go barefoot or wear rough shoes, that would accelerate the opening up of the sores with danger to his life, since he had a very delicate and weak constitution. And on the same day Dr Schratino said he had visited Bernardo’s nephew who was four or five years old, and who was troubled by a disturbance of cold and wet humours in the head, with great weakness in the eyes which made him almost blind. Moreover, the boy’s mother was unhealthy and was bleeding with distillation of humours from the brain (catarro), and was running a risk of becoming phthisic (another generic term for a wasting disease). Asked for the grounds of his evidence, he replied that he was a physician and a practitioner, and that that was the truth.

In this case we see traditional western medicine in action. Humoral practice really did exist outside the pages of vellum-bound tomes of Galen! Despite the evidence of the two doctors, the court was not sympathetic, for in 1631 Bernardo was sentenced to eighteen months’ harsh confinement in the Capuchin convent in Genoa. However, in July 1633, while allowed out on compassionate leave to visit Ginetta, the Reverend Father did a runner and sought asylum in the rival republic of Venice. There the ex-friar Bernardo continued painting unhindered [4].

Between the trials of 1625-6 and these new witness statements of May 1630, mention of the painter’s aged mother disappears. It was she who, many years before, had sent the boy Bernardo to train as a painter. She seems to have died in February 1630. Could she have been the old lady who was shown making up in front of her dressing table mirror – freed at last from the ebb and flow of humours, and the indignities of old age?