Anatomy of a Dictionary 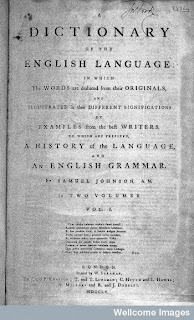 So far, 2009 has been very much a year of anniversaries. Already we’ve had the 250th anniversary of the birth of Robert Burns; events to mark the 500th anniversary of Henry VIII acceding to the English throne are now underway and there’s no escaping Charles Darwin, with two anniversaries – 200 years since his birth; 150 since the publication of his most famous work – book-ending the year.

But this year is also the 300th anniversary of the birth of Samuel Johnson, and it was on this day (15th April) in 1755 that his most famous work – A Dictionary of the English Language – was first published.

The Wellcome Library holds a first edition of the Dictionary, and as Johnson’s life has often been analysed through his health, we thought looking up some of the more medical words out of the 40,000 defined within may be a worthwhile way to celebrate this anniversary.

Judging by the dictionary, it appears Johnson was not entirely a fan of members of the medical profession. Johnson relied heavily on quotations from literature to aid his definitions, and some of those chosen are clearly critical. For example, under the definition for ‘doctor’ – described by Johnson as ‘a low word’ – he quotes Jonathan Swift:

“In truth, nine parts in ten of those who recovered, owed their lives to the strength of nature and a good constitution, while such a one happened to be the doctor”.

Physicians don’t get let off lightly either. To define the profession, Johnson quotes from Shakespeare’s Timon of Athens:

“Trust not the physician, / His antidotes are poison, and he slays / More than you rob”.

Not surprising, given Johnson’s infamous wit, the dictionary is a more enjoyable read than most reference works. For example, here’s the entry for the word “pox”, which combines the origin of the word with some grand synonyms:

Pox [properly pocks, which originally signified a small bag or pustule; of the same original, perhaps, with powke or pouch. We still use pock; for a single pustule]
1. Pustules; efflorescencies; exanthematous eruptions
2. The venereal disease. This is the sense when it has no epithet.

And if you look closely, Johnson’s beloved London pops up in the Dictionary. So, for the word “medicate”:

To Medicate
To tincture or impregnate with any thing medicinal
“The fume, steams, and stenches of London, do so medicate and impregnate the air around it, that it becomes capable of little more” (Graunt’s Bills of Mortality).

Johnson suffered from such ailments as scrofula, asthma, insomnia, depression and gout, but few of them are described in the Dictionary. But perhaps the most striking absence from the Dictionary – and here we move away from the medical – is the word flagged up in the famous episode of Blackadder. That’s right: Johnson’s Dictionary includes over 40,000 words, but “Sausage” is not one of them…