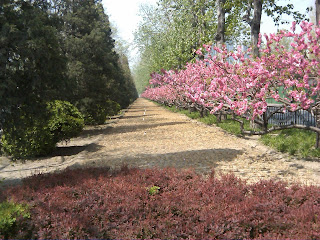 On the boulevards of Beijing the trees are in blossom as the Wellcome Library’s exhibition is about to open at the World Art Museum.

The exhibition is Beijing’s first opportunity to see the vivid photographs of late Qing dynasty China taken between 1869 and 1872 by the Scottish traveller John Thomson (1837-1921). It has taken four years of sterling work by the curator, Betty Yao. 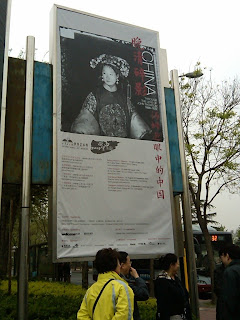 The exhibition posters in the streets remind us that we have only one day left to finish off the work. For each of the 150 wall labels there are two versions, one in English and one in Chinese, which doubles the work of installing them. Fortunately our Chinese colleagues are generous with their time, work as a team, and appear to be indefatigable.

The last minute tasks are finished and the opening ceremony at the Beijing World Art Museum is introduced by Betty Yao, the moving spirit behind the exhibition. She is followed at the microphone by Mme Zhao Shaohua, Vice-Minister of Culture, People’s Republic of China, and H.E. the British Ambassador, Sir William Ehrman: both of them speak knowledgeably about John Thomson and the present-day significance to China of his records of Chinese people and their conditions of life in the past. Our ambassador, speaking in Mandarin Chinese and English, pays tribute to Thomson’s Scottish resilience. They are invited to cut the opening ribbon, together with Mr Feng, Deputy Director of the Museum, and William Schupbach from the Wellcome Library. 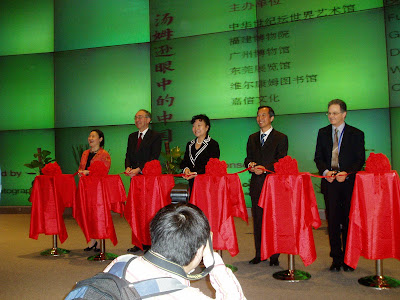 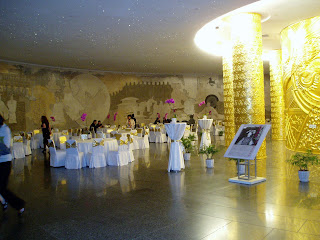 The hall is supported by golden columns and lined with stone reliefs of scenes from Chinese history. 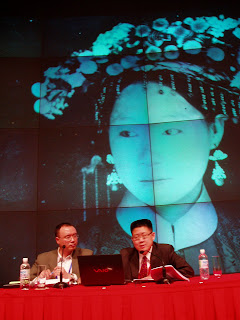 In the afternoon, there are interviews with the television, radio and print media, followed by two public lectures in the cavernous auditorium. The first is by Tong Binxue (far right, with the translator), a leading historian and collector of Chinese photography. He places Thomson in the context of other photographers in China, especially the Frenchman Jules Itier (1802-1877) and the Swiss Pierre-Joseph Rossier (1829-1883?), both of whom preceded Thomson to Beijing. However, as Tong points out, Thomson surpassed the others in his range of subjects, places and genres. 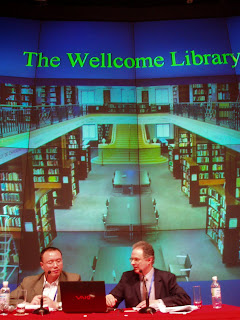 Then William Schupbach outlines Thomson’s biography and explains how, against all the odds, Thomson’s original negatives have survived thanks to the foresight of Henry S. Wellcome, and are sitting today on the shelves of the Wellcome Library in London, available to the interested public. 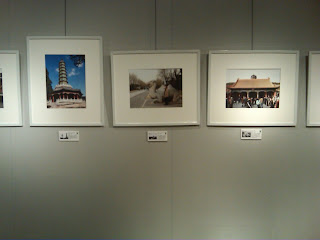 There are plenty of questions afterwards. One of them comes from a teacher involved in the educational programme: students in a school specializing in photography took photographs in 2009 of the very same places that Thomson photographed in 1872. The modern photographs, taken in colour, are on display, each with a small black and white reproduction of the 1872 photograph. The educational programme is being expanded to cover all school districts in Beijing. Lucky schoolchildren!

The gallery is thronged with visitors. 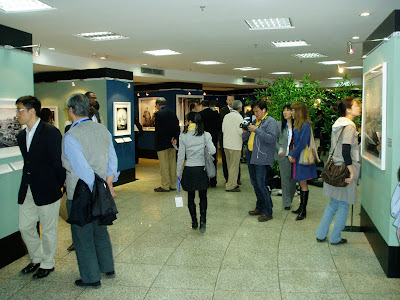 The photographs are a revelation. Their power is heightened by the simple and elegant design, the work of Jehanne de Biolley and Harrison Liu. The photographs are shown in white frames and are printed in different sizes to give the sequence a shape and a rhythm. There are three different colours for the wall fabrics: wisteria for Beijing and the north, celadon-green for Shanghai and the Treaty ports on the east coast, and sea-green-blue for the south (Canton, Hong Kong and Macao). Within each section there are groupings of like subjects: the land and the river, the people, and the built environment. 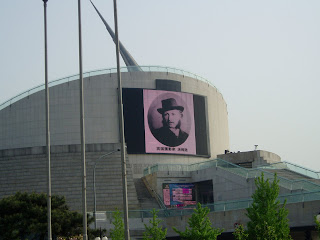 In the evening sunshine the portrait of the photographer, John Thomson, looks out from the Beijing Millennium Monument over the city which has been transformed since he visited it in 1872.

The following day China Central Television carries on its English-language programme Cultural Express an extensive report on the exhibition, and China Radio International carries an interview with Betty Yao. Among the print media, English-language papers which feature the exhibition include the Daily Telegraph, the Independent and Beijing Time Out , as do many Chinese newspapers and the April 2009 issue of Chinese photography. The web and the blogosphere also do their bit (for example the BBC website and the blog China Rhyming). With all this enthusiasm from our friends in the media, it is not surprising that the exhibition continues to attract visitors through the following days. 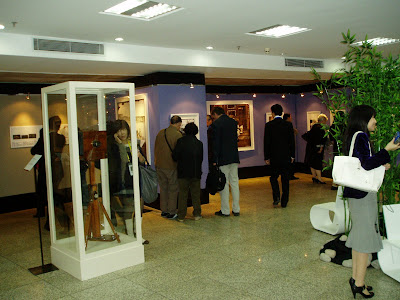 Photographs by Rowan de Saulles and William Schupbach. Thanks to Betty Yao and all who helped to make the exhibition a reality.

8 comments on April in Beijing