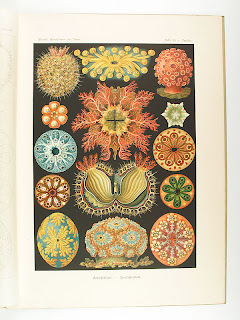 The Wellcome Library has acquired a set of Kunstformen der Natur (“Nature’s art forms”) by the German evolutionary biologist Ernst Haeckel (1834-1919). Kunstformen der Natur is described by Breidbach as the last and most ambitious of Haeckel’s major graphic works and the summing up of his world view [1]. It consists of one hundred colour plates which are intended to justify Haeckel’s adaptation of Goethe’s “typological” biology. The “typologies” which they publicise are analogous forms in different domains, such as the antlers of the African antelope, the scales of fish and the sense-organs of bats.

These analogous forms or types are demonstrated graphically in an overwhelmingly generous supply of colour lithographs. They purport to show how the simplicity and uniformity of nature is expressed in invertebrates and some vertebrates in an almost unbelievable profusion and multiplicity of repeating and varying patterns. Most are from Haeckel’s favourite research areas in natural history such as jelly-fish, protozoa, infusoria, and corals, some of them newly discovered on a research trip to Malaya and Java. Who would have believed that slime could be so colourful and well-constructed? Some higher animals such as insects, frogs, snakes and birds are also included. 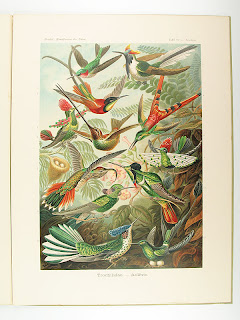 The spectacular lithographs were sketched by Haeckel from his research notes going back many years, then drawn professionally by his lithographer Adolf Giltsch (1852-1911) of Jena, emended by Haeckel, and finally redrawn on the stone in colours by Giltsch for printing. Most of the plates are in a single delicate colour (one in a variety of hues), but some are in three or four colours, such as the print of hummingbirds (right).
The plates act as a visual source book comparable to the works on the Alhambra and on the “grammar of ornament” by Owen Jones . Indeed, the last chapter of Jones’s The grammar of ornament (1856) discusses ornamental patterns taken from flowers and foliage, providing a starting-point from which Haeckel (and others, including Haeckel’s opponent D’Arcy Thompson) could extend the discovery of patterns to animals. Like those other works, Kunstformen der Natur was also raided by designers of lamps, vases, drinking fountains and ceramic tiles [2]. 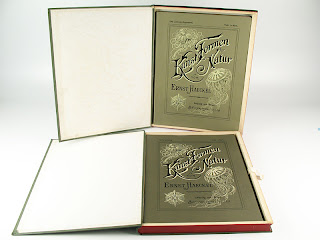