The Atrocity Exhibition and the Wellcome Library

By Chris Hilton | Events and Visits 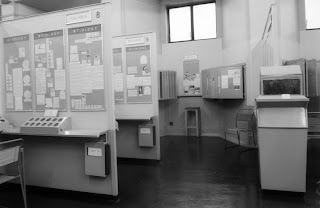 Obituaries of J.G. Ballard published in the last week have all mentioned the writer’s two years studying medicine at Cambridge, a period in which he dissected the physical body as prelude, he hoped, for a career in psychiatry. As it turned out his explorations of inner space took place in a different arena: his studies, however, were not lost and medical detail saturates his work. With this in mind it is perhaps no surprise that the Wellcome Library – or rather its predecessor, the Wellcome Museum – has a tiny part in one of his most notorious fictions.

The Atrocity Exhibition, published in 1970, can be seen either as a non-linear novel or as a collection of linked short stories (the bulk of it comprises changing versions of the same chapter). In it, a variously-named central character – Travis, Travers, Talbert: the name is different in each chapter – attempts to deal with a world that has ceased to cohere and make sense to him, assembling groups of objects in the hope of creating significance – elevations of a multi-storey car park, chemical analyses of human secretions, diagrams of wounds and so forth. In turn he is observed by other characters, some medical professionals, who try to make sense of his actions and of the objects he brings together. In chapter 8, “Tolerances of the Human Face”, we read:
“…Dr. Nathan pondered the list on his deskpad. (1) The catalogue of an exhibition of tropical diseases at the Wellcome museum; (2)…”

Although the Library’s new ‘Medicine and Literature’ events aim to explore the relationship between these two themes, the example of The Atrocity Exhibition shows that Ballard was already linking the two – and in the context of the Wellcome – more than three decades ago.

Photograph: the tropical medicine section of the Wellcome Museum of Medical Science in the mid-20th century, as it was when The Atrocity Exhibition was written.