The Wellcome Library holds thirteen first generation prints of the outstanding photographs Curtis produced of Native American peoples. Remarkable both as artworks and ethnographic studies, they are a vital record of traditions that were fast being eroded and transformed.

Fearing that Native Americans were ‘a vanishing race’, for nearly thirty years Curtis travelled throughout the American West, documenting over eighty tribes to ensure that some trace of their traditional ways remained. Funded by the financier J. Pierpont Morgan, and with the support of President Theodore Roosevelt, his work culminated in the publication of his twenty-volume study, The North American Indian, which contained some 2, 232 photographs with accompanying text. 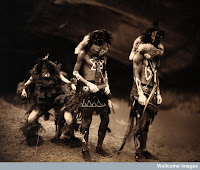 Curtis sought to record all aspects of the native traditions he encountered. When he did not come upon such traditions naturally, Curtis would attempt to accurately recreate them, as was the accepted ethnographic practice of his day. In the photograph to the right, three Navajo gods, or Holy People, are given earthly form in a Navajo ceremony, the Yeibichai, or Night Way. Wakened and compelled by the reiteration of ritual words and acts – fixed rhythms it would be perilous to break – the mysterious and powerful Holy People are called upon to restore harmony to the universe, unbalanced by the actions of man, the cause of sickness and decay. Curtis was with the Navajo in the spring, rather than in the winter months when such a ceremony would usually have been performed. Unperturbed, he recruited various individuals, including the sons of a non-Navajo trader, Charlie and Sam Day, to recreate the costumes of the masked Holy People and to pose for him in them. Represented here are Tonenili – the rain god, a storm of foliage – and the Hero Twins, Monster Slayer and Child of the Water, war gods who played roles in most Navajo ceremonies. 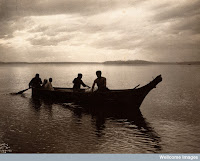 Though his work was celebrated in his day, Curtis lost the rights to The North American Indian and died in poverty owing to the great costs he accrued pursuing his exhaustive project. Thanks to the determined vision of Curtis, his work remains as one of the most important records of Native American culture undertaken.

The Curtis prints held by the Wellcome Library are available to be viewed freely in the library. Reproductions of a number of these prints can also be seen in the Medicine Man gallery of Wellcome Collection.