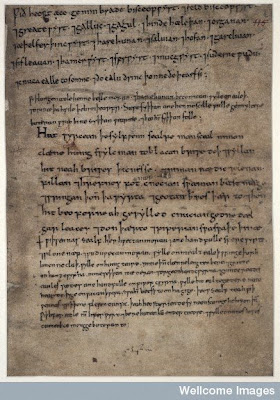 Back in March we highlighted a work by William Blades – The Enemies of Books. This single parchment leaf, Western MS.46, has had to deal with a number of threats included in Blades’ list – fire, water, ignorance and bigotry, and bookbinders, but to this list we might also add well-meaning librarians. Its hazardous journey began around the year 1000 A.D. when it was a blank leaf in a manuscript book probably part of an English monastic library. Some time in the early 11th century several different monks wrote down medical recipes on the blank leaf, not in Latin but in English.

The medical recipes are for treating heartache, lung disease, ‘wenns’ or tumours, and liver disease. Just a few hundred complete Anglo-Saxon manuscripts survive and only a very small number of these are scientific texts. The Old English Herbarium is a translation of the Latin Herbarium of Pseudo-Apuleius (British Library MS. Cotton Vitellius C III), the Lacnunga is a miscellaneous collection of medical texts (British Library MS. Harley 585) and Bald’s Leechbook is a medical text compiled in the 9th century (British Library MS. Royal 12 D.XVII). We don’t know much about the recipes on our leaf and further research is still needed.

The leaf happily stayed in its volume for 500 years, until Henry VIII decided to close English monasteries and confiscate their property. Many manuscripts were destroyed, broken up to be used for lining boxes, hats and gloves and for bindings of new printed books. This leaf became the cover for a Latin school book printed in 1558 (Petrus Mosellanus, Tabulae de schematibus et tropis ). The book came into the collection of John, Lord Robartes (1606-1685) at Lanhydrock, Cornwall (ironically, an estate which had previously been owned by the Augustinian priory of St Petroc at Bodmin). And so another 300 years passed uneventfully for our parchment leaf, only troubled by dust and neglect, another of Blades’ enemies. Then, on 4 April 1881, the house was engulfed by fire. Miraculously the books survived, thrown out of the library windows. 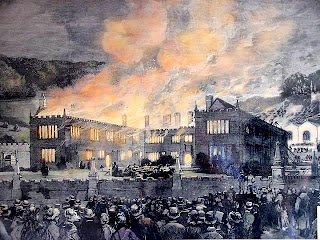 Having survived the fire, the books were then to suffer at the hands of a well-meaning librarian, William Henry Allnutt, who was an assistant in the Bodleian Library. In the 1880s he was employed on a part time basis at Lanhydrock to reorder and catalogue the books and decided to remove many manuscript and printed fragments from their bindings. This leaf became part of a volume of manuscript fragments, labelled B.12.26, which was then sold to the Bodleian Library in 1963 (MS. Lat. Misc. b.17). However, a few years earlier several leaves were removed and sold separately. The Wellcome Library purchased this leaf at Sotheby’s in 1956. The printed school book remains in the library at Lanhydrock (shelfmark D.7.34), now in a 19th century binding. The estate is now managed by the National Trust.

There is a full description of Western MS.46, including a modern English translation of the recipes, in the archives database. If you would like to find out more about the Wellcome Library’s collection of manuscript and printed herbals, there will be an Insights talk ‘Healing Herbs’ on Thursday 4 June at 3pm. More information will be available soon on the Wellcome Collection website.