Napoleonic advancement in the Wellcome Library 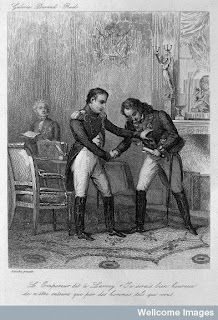 Popular fascination with Napoleon’s military aristocracy, the two dozen or so assorted sons of small tradesman and junior army officers of the old regime who rose to Marshal’s rank, riches and titles on the back of Bonaparte’s campaigns, shows no sign of diminishing. The individual qualities and personalities of these men are perhaps less the focus of interest than the phenomenon of exponential career advancement that they represent; indeed military historians generally consign them as a group to the ranks of the second rate.

One or two however stand out, among them Jean Lannes (1769-1809), Duc de Montebello, one of the few among Napoleon’s underlings who proved competent as an independent commander-in-chief as well as in a subordinate role to Bonaparte himself. Lannes was also the first of Napoleon’s marshals to die from enemy action. He was struck by ricocheting shot on the field of Essling outside Vienna on 22 May 1809. His shattered leg was amputated by Dominique Larrey, surgeon-in-chief of the Guard, but septicaemia set in some time later and on 30 May Lannes expired after three days of delirium and agony.

The Wellcome Library holds a collection of Larrey’s letters home to his wife Charlotte, one of which, written from Vienna on 1 June, describes the last days of Marshal Lannes in some detail:

“I spent three nights and three days at his side without interruption. I tried with all my care, energy and skill but still he died. The blood lost before the operation and the shock to his entire system had weakened him fatally. On opening his body the ventricles of his heart were found to be entirely devoid of blood. I lost him on the 9th day after his injury … his death has upset me a great deal”.

Part of the reason for Larrey’s discomfiture was the loss of Lannes’s advocacy on his behalf as he made his career in the cut-throat world of Napoleonic army politics. Not only did one need all the high-placed friends one could get, it was also no doubt unsettling to contemplate failure to save the life of one of Napoleon’s favourite marshals. Larrey was on tenterhooks of expectation of a barony, which had apparently been promised but somehow had not yet materialised. However, always alert to turning events to his advantage he was soon negotiating with the director of the Louvre for a part in the proposed monumental painting of the death of Lannes.

The Wellcome Library’s Larrey manuscripts, along with other relics of the Napoleonic wars, were formerly part of the renowned Bibliotheca Lindesiana, the collection of Alexander William Crawford Lindsay (1812-1880), earl of Crawford and of Balcarres, and his son James Ludovic Lindsay (1847-1913), the 26th earl of Crawford. Towards the end of the nineteenth century financial pressures led to the dispersal of much of the library; in 1900 all the manuscripts apart from the French revolutionary and Napoleonic documents were sold to Mrs Rylands and are now in the John Rylands Library of the University of Manchester. The remaining material was finally sold at auction by the 27th earl and several lots were acquired by Sir Henry Wellcome for his collection.

Larrey’s correspondence is catalogued as Western MSS. 5316-5320 and can be consulted in the Wellcome Library’s Rare Materials Room.