Robert Whytt portrayed from the life 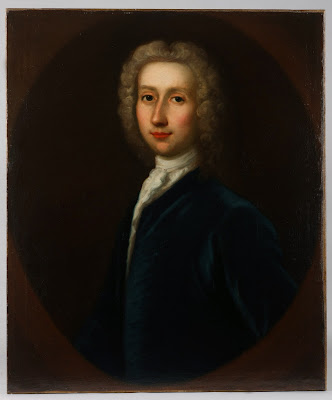 Robert Whytt (1714-1766) was both a practising physician in Edinburgh and a professor at Edinburgh University. His extensive writings record his search for answers to questions that are still studied today: what distinguishes life from death, how people stay alive, why they fall ill, and what are the invisible processes involved. The seeming familiarity of some of his discoveries, such as the reflex action, led the neurosurgeon Sir Geoffrey Jefferson (1886–1961) to say that Whytt was “by common consent, the greatest of the early neurophysiologists”. [1]

That verdict may today seem rather comical. Whytt lived in the 18th-century, and his ideas are not readily comprehensible today without some reference to his inherited vocabulary. [2] His thoughts about the nervous system came to the fore in a long-standing controversy with Albrecht von Haller over the faculty of sensation: Whytt’s idea was that sensation, and indeed life itself, was due to the soul’s distribution throughout the body, and its ability to take on different forms and functions in the different organs in which it lodged. Although Whytt has been called “the last of the animists” (French, p. 164), he is distinguished from the animists of the Stahl school, who thought that the soul must be a centralised controlling unit. Can Whytt really be said to have “discovered the reflex action”, at least in a sense familiar today, if he saw the phenomenon he was describing as a function of invisible and sometimes non-material “animal fluids” channelling the functions of the Aristotelian soul around the various parts of the body?

As this example shows, despite his extensive writings Whytt is not an easy figure to get to grips with. Even the pronunciation of his name is unclear (it seems to be identical with “white”). There is an excellent monograph on him, written by the late Roger K. French, and published by the Wellcome Institute. However, reading that monograph, one understands why French’s adviser, Professor Alistair Crombie, allotted this intractable subject to one of his most talented students (French later became a distinguished historian, particularly of mediaeval thought). It is characteristic of Whytt that he died of a mysterious complex of symptoms said to “correspond to no known disease” (French p. 13) 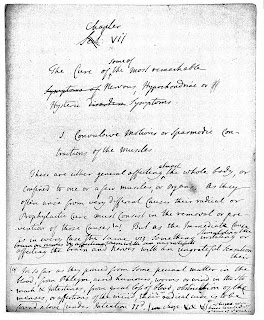 It is perhaps easier to approach Whytt through his historical context, as a luminary of the Edinburgh enlightenment and through his role in the Edinburgh medical world of his day. Fortunately he left an archive which passed through his descendants until part of it was acquired by the Wellcome Library in 1991. Drafts of his writings allow one to see his thought in action (click on the image on the left to read his manuscript).

Manuscript draft by Robert Whytt, ‘The cure of (some of added) the most remarkable (symptoms of deleted) nervous, hypochondriac or hysteric (disorders deleted) symptoms’. Wellcome Library MS 6877/4

Missing from the archive available at that time was the portrait which Whytt commissioned from G.B. Bellucci in 1738 (reproduced above). The portrait remained with his descendants and has been inaccessible to the public for virtually its entire history. Fortunately it has now become possible for the Wellcome Library to acquire the portrait and reunite it with Whytt’s papers. The portrait shows the young Whytt in the year in which he became a fellow of the Royal College of Physicians of Edinburgh, exuding the confidence that led him to lock horns with Haller. 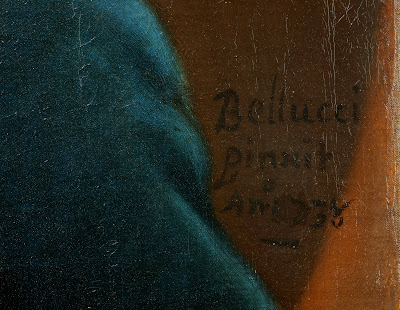 The portrait is signed “Bellucci pinxit An.o 1738” (Bellucci painted it in the year 1738). Giovanni Battista Bellucci (1684–1760) was the son of the Venetian painter Antonio Bellucci (1654–1726), and came to England with his father in 1716. When Antonio returned to Venice in 1722, Giovanni Battista stayed behind and made his career as a portraitist in the British Isles, though today his paintings are hard to find. There is a portrait attributed to him in the Talbot Rice Gallery, University of Edinburgh, as is a painting of Diana in Northampton Museum, Northamptonshire, but the two main collections of his work, in Schloss Pirnitz (Brtnice, now in the Czech Republic) and in Tyninghame House (in East Lothian, Scotland) appear to have been dispersed. [3]