The origins of NHS bureaucracy

By admin | From the Collections 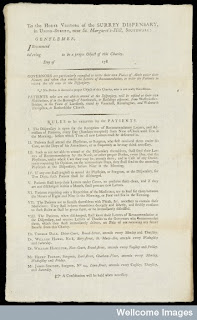 The Dispensary movement had its beginnings in London in the second half of the 18th century. Championed by the Quaker physician John Coakley Lettsom, a system of dispensaries was introduced where the poor could be treated as out-patients and even be attended at home by physicians of high rank. The dispensaries were supported by individual subscribers who could then sponsor a patient. The library has recently purchased six printed forms which are rare examples of how administration of the sponsorship system worked and the origins of our modern health service bureaucracy.

Three forms were for the Surrey Dispensary – admission (with a long list of rules), for the patient to thank their sponsor on recovery and a third for the services of a midwife. The other set were for Eastern Dispensary – admission, to give thanks to the sponsor and to inform the sponsor that the previous patient had died and there was a vacancy. Along with these are two small pamphlets giving an account of these two dispensaries, including a list of the subscribers. 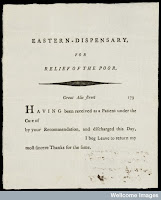 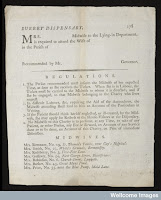 What is even more unique about this set of forms is that we know who originally collected them and why. These items were among the recently dispersed papers of Thomas Adams (d. 1813), solicitor, agent for the Duke of Northumberland and owner of Eshott Hall, south of Alnwick (purchased in 1783). They were sold at auction in Carlisle by Thomson Roddick & Metcalf auctioneers in July & August 2008. It is clear from a letter which accompanies the Surrey pamphlet, and a number of other documents from the collection, that Adams was planning to set up a dispensary in Alnwick and went about gathering as much information on the management of these institutions as he could find. He collected other material from Newcastle, Durham and Wakefield. For some reason his ambition was not realised until after his death. The Alnwick Dispensary was founded in 1815. 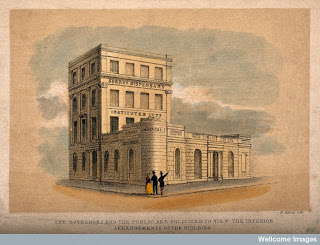 The original building for the Surrey Dispensary, dating from 1777, still survives on Falmouth Road Southwark. The records, including subscription books and patient registers, are now held at the London Metropolitan Archives. The Eastern Dispensary moved to new premises in 1858. It closed in 1940, but now has a new lease of life as The Dispensary Pub and Dining Room.

Detailed descriptions of all the items can be found in the Wellcome library catalogue.