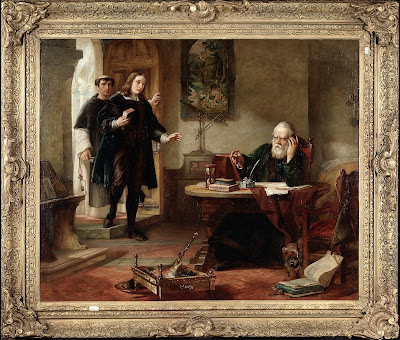 During his sojourn in Italy in 1638, the English poet John Milton visited Galileo who was then under house-arrest at Arcetri near Florence. Six years later, in his Areopagitica (1644), Milton described that visit in these words:

There it was that I found and visited the famous Galileo grown old a prisoner to the Inquisition, for thinking in Astronomy otherwise than the Franciscan and Dominican licensers thought.

This episode appealed strongly to later writers and painters, for several reasons. In the first place, the story is rich in contrasts: the polarity between the youth of Milton and the old age of Galileo; the encounter of Europeans from north and south of the Alps; and the meeting of a poet and a mathematician. One expression of fondness for this episode is this large painting of the scene (above) by Solomon Alexander Hart which was exhibited in the Royal Academy in London in 1847 and is now in the Wellcome Library.

The painting also provides a subtle interplay between themes of Galileo’s time and equivalent themes in later periods. The first involves censorship and freedom of speech. The Areopagitica in which Milton described his experience of Galileo’s house-arrest became a foundation document in the historic English fight for freedom of speech. Through its inclusion as an example in Milton’s essay, Galileo’s confinement contributed to that cause. 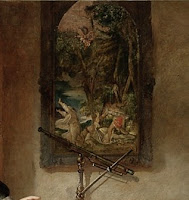 The same theme is also played out in the centre of the back wall in the present painting (left), where we see a painted representation of another painting, with Galileo’s telescope placed pointedly in front of it. It is a reduced version of Titian’s altarpiece of the murder of St Peter Martyr: Titian’s vast painting was destroyed by fire in Venice in 1867, but Hart probably saw it on his voyage to Italy in 1841-1842. Several old small-scale cabinet versions of Titian’s altarpiece like the one in the background of Hart’s painting have survived: the one shown here (below right) was offered for sale at Sotheby’s in London in 2006 (25 April 2006 lot 335)

St Peter Martyr was the chief Dominican inquisitor and persecutor of heretics. As Galileo was accused by a Dominican inquisitor, a painting of St Peter Martyr’s death at the hands of those heretics would have been an appropriate picture for Galileo to contemplate. While the friar acting as Galileo’s gaoler in Hart’s painting opens the door to permit Milton to enter, another friar in Titian’s painting meets his end at the hands of those he persecuted.

Secondly, the painting treats Galileo’s freedom of thought as a precursor of Jewish emancipation. The painter was Solomon Alexander Hart (1806-1881) and the painting was executed in 1847. Hart was an observant Jew and one of the first Jewish Royal Academicians. In the 1830s a series of bills had been presented to the British Parliament to give the same full legal status to Jews as to non-Jews, but each time the bills were defeated. A new campaign began in 1840, which was finally successful in 1845, although even then Jews could still not become full Members of Parliament, and the campaign had therefore to be continued until 1858. Hart was close to the emancipationist campaign and painted portraits of its two leaders, Sir David Salomonsand Prince Augustus Frederick, Duke of Sussex (1773-1843), the latter a commission from the Jews’ Hospital in the East End of London.

Hart’s election to office in the Royal Academy was therefore indebted to the liberal values praised by Milton in the aged Galileo – the very subject of the Wellcome Library painting. Galileo is presented as as a champion of liberty, which, in the context of Hart’s position in the 1840s, includes the liberty of Jews to act in parity with non-Jews wherever they lacked that degree of equality.

English readers will find a succinct new summary of Galileo’s travails in Maurice A. Finocchiaro, ‘Myth 8: that Galileo was imprisoned and tortured for advocating Copernicanism’, in R.L. Numbers (ed.), Galileo goes to jail and other myths about science and religion, Cambridge, Mass.: Harvard University Press, 2009, pp. 68-78.