June the 9th is International Archives Day, designated by the International Council on Archives (ICA). Of course, archives are everywhere: wherever there is writing, there are people using it to document their activities. Less obvious, perhaps, is the global span of the archives held at the Wellcome Library. It is, however, a sad truth that wherever human beings go, disease and injury follows them, so the medical profession is needed everywhere, and as the European powers expanded across the world in previous centuries medical men and women followed, noting their impressions. Below are a few samples from the Wellcome Library holdings of archives generated in far corners of the world during the nineteenth century, the tip of an iceberg. 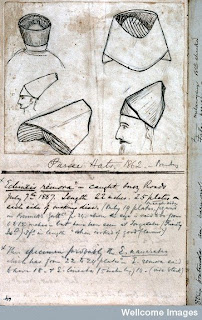 John Temperley Gray (1835-1892), a ship’s surgeon for P&O, between 1862 and 1888 filled a volume (MS.5875) with notes on local wildlife (including beautiful coloured pictures of snakes, birds and a caterpillar), the population of Bombay (inter alia, sketching the various characteristic types of hat worn by the Parsees), local customs such as the different child-birth practices of various religious communities, local songs (which he transcribes with musical notation) and a whole gallery of other subjects, as well as the notes on scientific subjects and the French lessons with which, presumably, he sought to fill productively the long hours at sea.

At one point Gray records a couple of humorous anecdotes in which dialogue takes place in an Indian language and the peremptory sahib and mem-sahib (fluent chiefly in command and abuse) are wrong-footed by the responses of their Indian servants. In contrast to these, fifty years early a young surgeon on the East India Company ship the William Miles records a child of English parents who “does not speak a word of English. . . . It certainly did strike me as a singular thing, to see a little fellow of 5 or 6 speaking to the natives so fluently, close to several of his own countrymen, trying to speak a word or two, with such difficulty.” (MS.7114, p.180) 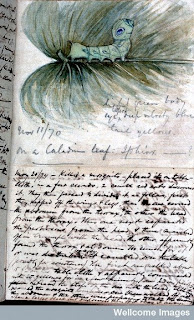 On the other side of the world, the naval surgeon Henry Piers passed around the coast of South America in the 1860s on his way to Vancouver. On the way, he recorded his impressions of the Falkland Islands: “the land [was] boggy and covered with a coarse grass, but not a tree or shrub was to be seen – a heath, bearing small berries resembling but smaller than cranberries, was very common and called, from the geese feeding on its fruit, ‘Gooseberry’… It was difficult, in many parts, to avoid sinking into the bog … The land was undulating, with hills of moderate elevation – some of them topped with crags – the aspect of the place, in general, was very uninviting …” (MS.6110, p.7)
He notes that, doubtless in compensation for the unappealing landscape, the town of Stanley although small boasts four beer shops. A few weeks later he gives a vivid description of being anchored in the narrow Straits of Magellan: “Our anchorage at ‘Sandy Point’ was so close to the shore – within half a mile I should think – that we could distinctly hear noises resembling the croaking of frogs &c. and the ripple breaking on the shore…” (MS.6110, p.17)

This is, of course, only a tiny sample of the international content of the Wellcome Library’s holdings of archives and manuscripts. Sources guides on the Library website provide a route into various geographic areas, and the collection as a whole can also be searched for particular place-names or any other words via the online archives catalogue.