Item of the month June 2009: The Jagannāth Triad 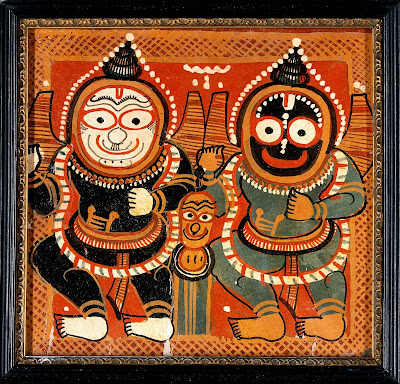 Faced with these striking figures for the first time, one could be forgiven for bemusement: who or what are these goggle-eyed black-and-white minstrels? This and eight related paintings were bought by Sir Henry Wellcome at Stevens’ auction house in London on 18 October 1932. Stevens’ cataloguers were also puzzled by them, cataloguing them as “interesting Eastern paintings”. Perhaps because there were Mexican items in the same sale, the paintings were described in the Wellcome accessions register as Mexican. In 1988 they were identified first negatively (by Professor Anthony Shelton) as not Mexican, and then positively (by Dr Brian Durrans) as having a style and a subject matter unique to a part of the world exactly the other side of the globe from Mexico: the state of Orissa on the east coast of India. The city of Puri in Orissa contains the ancient and enormous temple of the god Jagannāth (Jagannātha), and this painting represents the three deities whose wooden effigies are contained in the inner sanctum of that temple.

Jagannāth himself is the figure on the right of the painting, with round eyes and a black face. The figure on the left is his brother Balabhadra (Balarāma) with oval eyes and a white face, while the stump of a figure in the middle is their sister Subhadrā with oval eyes and a yellow face. In this and similar paintings, made to provide pilgrims or tourists with a souvenir of their visit to the temple, the crude folk-image style figures are foreign both to the elegant balletic poses of conventional Hindu iconography and to the delicate outlines and hues of Mughal painting. “Although one result of the Mughal attempts to conquer Orissa was its being opened to outside influences, no amount of cross-fertilization of cultures could induce the Brahmins and the painters at Puri in the small state of Khurda to abandon their pictorial traditions.” [1]

In the temple at Puri, the deities are assumed to be present in the three wooden carvings. They are therefore attended like human princes by a staff of over 600: they have a daily bath in which water is poured on reflections of the deities in metal mirrors, and they are provided with new clothes and three meals a day to the singing of the Gita Govinda. However, once a year there is a more important turn: on the first day the effigies themselves are bathed, after which they are discoloured by the bath-water and are then kept from public view for fifteen days. This period is called Aṇasara or anavasara, when the deities are supposed to have fallen sick with a fever and are taking a rest. The doors of the sanctum are closed, and during the fever period the wooden effigies are repaired and repainted. For that fortnight, substitute icons in the form of paintings are prepared by the local tribe of painters (Chitrakāra): their paintings are called “aṇasara paṭi” or fever paintings. Today they are in conventional Hindu style, one painting being devoted to each of the three deities. [2]

Very different are the souvenir type paintings of which one example of those in the Wellcome Library is shown above. These are “jātrī paṭi” or “pilgrim paintings”, and have been produced by families in Puri and in surrounding villages, using a limited range of materials and techniques. For paintings produced by traditional methods, customers had a choice of canvas or paper as the support: the paper works were cheaper and were often painted on newsprint –useful for historians, as the date of the newspaper, if visible on the back, gives a terminus post quem for the date of the painting. The surface is primed with chalk mixed with tamarind gum. There was a choice of standard sizes. The paintings on canvas were painted in a range of sizes calculated to be cut from a sheet of canvas measuring 158 x 180 cm. with no pieces left over. The paint is a kind of distemper: the pigments are mixed with vegetable gum or animal skin glue. The colours are predominantly earth colours: cinnabar and lake for the prominent red backgrounds, lampblack for the blacks, orpiment for the yellow face of Subhadrā, terra verde for the green body of Jagannāth, but ground-up conch shells for the whites.

The two main subjects on offer were the Jagannāth Triad, as shown above, and ground plans of the temple. The Wellcome Library has several examples of the Triad, and one large painting of the temple (below). 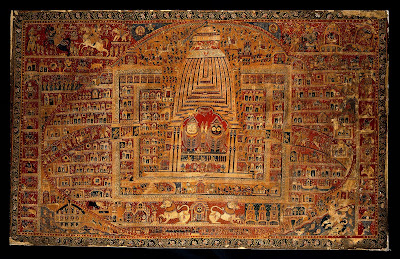 In the centre, the gherkin-like structure is the deul or shrine containing the wooden effigies. Below is the gate on the east side of the complex guarded by two lions. Around the temple is a curved line representing the conch shell of the world in which the temple is conceived to exist. Everywhere are innumerable figures representing carved and painted deities. The details of the painting deserve a fuller study by someone familiar with the temple.

In the early twentieth century the painters of “jātrī paṭi” in Puri declined into poverty owing to competition from chromolithography, but revived in the 1950s with the aid of a marketing campaign led, surprisingly enough, by a charitable organization of American Quakers. The revival was accompanied by a switch from earth pigments to synthetic colours. [3]

The highlight of the temple’s year is the Car festival (Rath Jatra), in which the re-painted effigies, recovered from their fever, are each placed on a huge chariot and paraded through the city of Puri. In 2009 the Rath Jatra occurs on 24 June, hence the choice of these paintings as the Wellcome Library’s Items of the month. From faraway London the magic of the Internet sends the images of the three gods back across the world, accompanied with goodwill to the millions about to attend the festivities in Orissa.