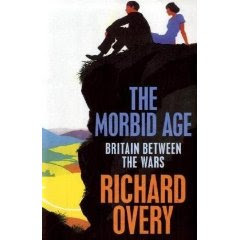 In the books pages of the British press, one of the most heavily reviewed titles of recent weeks has been Prof Richard Overy’s new work, The Morbid Age: Britain Between the Wars.

Published to wide acclaim, The Morbid Age is an examination of British intellectual life in the 1920s and 1930s. Overy’s argument is that the British mindset during this period was extremely inward and pessimistic, and puts this down to the after-effects of the Great War, coupled with anti-capitalist fears and psychological nervousness brought on by the growth of Freudianism. It’s a book where the usual interwar stereotypes of Bright Young Things and elegant flappers, are replaced with introspective intellectuals and footsore peace demonstrators.

Understandably, to make his case Overy draws heavily on a wide variety of archival sources, finding a rich vein of material to support his thesis in the Wellcome Library. Here, he draws on such sources as the papers of the Eugenics Society (who campaigned for the sterilisation for those deemed unfit for parenthood); the papers of Carlos Paton Blacker (psychiatrist, and Secretary of the Eugenics Society from the 1930s to the 1950s) and letters written to Marie Stopes, the birth control pioneer.