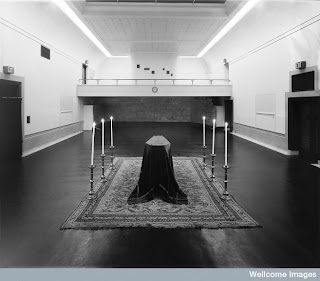 On this day in 1936, the death was announced of Sir Henry Wellcome.

Over his 82 years, Wellcome had overseen the growth of the pharmaceutical company he had co-founded into a multinational concern. Part of the fortune he made from this had been spent amassing a huge collection relating to the history of medicine, which formed the basis of the present day Wellcome Library.

Wellcome’s death was widely reported in the newspapers of the day. His obituaries (which were collated, and now form a small part of our Wellcome Foundation Archive) illustrate how Henry Wellcome’s life and achievements were summarised in the aftermath of his death.

The obituaries range from those published in national titles to regional newspapers. They also include a statement read out on the 9.30pm news bulletin of the British Broadcasting Corporation on the 25th July.

These accounts of Wellcome’s life do their best to summarise his achievements. Some examined his business life, whilst others described Wellcome as a “Scientist and Explorer”. Bazaar Exchange & Mart focused on Wellcome the collector, commenting that in his purchases from auctioneers:

“…he ‘made the market’ in the kinds of things he bought – medical relics, ethnological specimens and curious bygones of many kinds”.

In this attempt to commemorate the anniversary of Wellcome’s death, the following lines from the The Times obituary seem apt:

“Wellcome insisted that his light should not be hidden and that the name of Wellcome should always be prominent”.

(Image above shows Sir Henry Wellcome lying in state in the Wellcome Research Institution, before his cremation at Golders Green Crematorium on the 29th July).