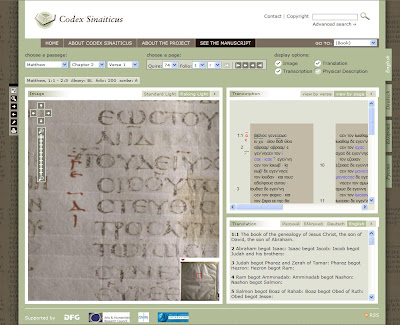 We normally post about our own holdings, or something related to our own holdings, but when I saw the Guardian article and British Library news today on the Codex Sinaiticus project, I was so impressed, I had to share. The Codex Sinaiticus is a 4th century Bible with the earliest known New Testament text. Written in Greek, it contains a large number of annotations correcting the original text.

The Codex Sinaiticus website is beautifully and lovingly crafted with a depth of information on the manuscript rarely seen on any website. It is so much more than just digital images – although bringing the manuscript together virtually from its 4 physical locations (the British Library, the National Library of Russia, St. Catherine’s Monastery, and Leipzig University Library) is in itself of huge benefit to scholars. You can view images in two different lights – “standard” light, which allows you to see the text well, and “raking” light, which shows the texture and natural undulations of the pages.

It has also been transcribed to allow full use of the texts, and much of it has been translated into Russian, English, German and modern Greek. Dig deep for extensive information on the history of the manuscript, the content and context of the texts, and – of particular interest to me personally – the details of the project itself. The site is a little slow at the moment, due to the press attention, but don’t let that put you off.

The British Library is hosting an exhibition and will be holding a conference on this manuscript and project.

Well done to the team of conservators, researchers, photographers, transcribers and techies who made it possible to bring this international treasure to the world in such a rich and engaging way.