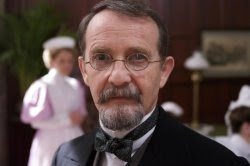 This Sunday sees the transmission of the last part of BBC One’s historical medical drama, Casualty 1909.

Set in the Royal London Hospital, the series is based on the Hospital’s original records, personal papers and contemporary newspapers accounts. So far in the series, the doctors and nurses of the hospital have contended with Anarchist ‘outrages’, protesting Suffragettes and militant animal rights activists.

Pictured above is one of the main characters in the series, Dr Henry Head (portrayed by actor Anton Lesser), by 1909 Assistant Physician at the Royal London.

Head is described in promotional material for the series as:

A pioneering psychologist, with a fiercely enquiring mind, yet a gentle touch. Despite the many frustrations Head perseveres where other doctors would give in and is able to reach even the most lost of his patients. He is willing to take huge personal risk to advance the development of medicine.

This ‘huge personal risk’, was the real-life Dr Henry (later Sir Henry) Head’s research into the human nervous system, and his actions as a human guinea pig. In collaboration with W H R Rivers, Head (pictured left) carried out a series of experiments in which his cutaneous nerves were severed, and the stages in which sensation returned were measured.

Papers relating to Head’s medical work, reside in the archives of the Royal London Hospital, and at the Library of the Department of Experimental Psychology in the University of Cambridge. However, the Wellcome Library does contain an extensive collection of Head’s personal papers (PP/HEA).

Whilst our papers may not record Head’s major achievements in medicine, they do include an incomplete autobiography which Head dictated in his later years, and correspondence which illustrates Head’s close relationship with the literary and artistic circles of his time. This material formed the basis of Dr Stephen Jacyna’s recent book, Medicine and Modernism: A Biography of Sir Henry Head (2008).

All of the episodes of Casualty 1909 – including those featuring Head’s self-experimentation – are still available to watch through the BBC’s iPlayer.