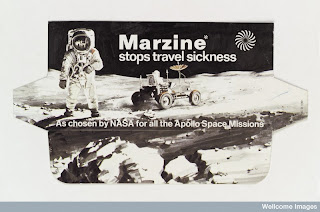 Over the last few weeks, there have been many commemorations in the media of the 40th anniversary of the first manned mission to land on the moon. We thought we would add to this by flagging up an item from our collections. So – what’s the connection between the Wellcome and this lunar scene?

Shown here is the packaging for the Wellcome drug company’s product, ‘Marzine’, which was used as a precaution against travel sickness. Ships from the Apollo Space programme carried the product, and – as illustrated – the company later utilised this fact in the design of its packaging.

‘Marzine’ wasn’t the only Wellcome product used in the US space missions: ‘Actifed’ – for the relief of nasal congestion – was also widely used, as was ‘Neosporin’ (to clear up bacterial infections of the eye). Indeed, on one mission in the 1970s, Skylab carried a medical kit which included seven products provided by Burroughs Wellcome Co (USA).

It’s rather fitting that the exploration of space in the mid twentieth century utilised Wellcome products, given in the late nineteenth century, Burroughs Wellcome & Co medicine kits were essential components of many expeditions to the farthest flung corners of the Earth – Stanley, Scott and Shackleton all set forth with the company’s products.