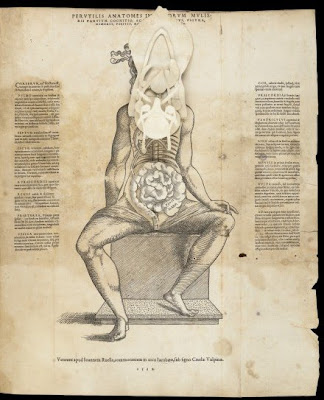 The Library’s rare and important collection of printed anatomical sheets dating from the 16th century are now freely available online via Wellcome Images. These intriguing prints depict the human body through labelled illustrations, often using a three-dimensional ‘pop-up’ device of superimposed flaps, which can be raised in sequence to display the internal anatomy of the male or female figure. The fugitive sheet thus mimics the act of dissection.

They were a popular instructional aid in the 16th century and many were produced in vernacular languages which could be read by a lay audience interested in the workings of the human body. The earliest recorded sheets were printed in Strasbourg by Heinrich Vogtherr in 1538. They were probably produced in great numbers but only a very few survive today. There are 19 sheets in our collection, many in pairs of male and female figures and one set of three with a skeleton sheet. This is the largest single collection in any institution. The surviving examples represent only a fraction of a much larger number most of which are now lost for ever, but there is always the hope of fresh discoveries in unexpected places.

Images have been created showing each flap in sequence. Animated versions are also available from the catalogue records, showing the flaps raised and lowered in sequence.