Death of a novelist 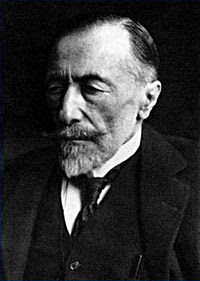 Eighty-five years ago today, on August 3rd 1924, the novelist Joseph Conrad died of a heart attack at his home in Kent.

Conrad’s narratives are slippery constructions, with lavish use of fractured timescales, unreliable narrators and indirect speech. Their indirection and refusal to commit to unambiguous statements is appropriate for their shape-shifting author: born Józef Teodor Konrad Korzeniowski in Russian Poland, he left Poland first for France and then for England, the Polish aristocrat remaking himself as a sailor and spending long years in the merchant marine before turning to fiction.

Conrad’s life was marked by illness from an early age as well as exile: his parents, Polish nationalists who were sent to Siberia with their infant son following a failed insurrection, were both dead from tuberculosis before Conrad was ten. His own life was characterised by periods of mental collapse: a suicide attempt at nineteen is still the centre of biographical debate, and later, in his fifties, he underwent a major breakdown after the completion of his novel Under Western Eyes in 1911. Novels such as Lord Jim analyse human behaviour when stressed to the limit and beyond. Physically, he was dogged by pain, suffering severely from gout for many years. 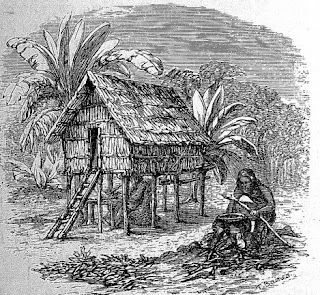 Some years after his death, in 1936, the German doctor Paul Wohlfarth wrote to two of his associates – his personal assistant Richard Curle and his French translator Gérard Jean-Aubry – to ask their opinion of how Conrad’s health had affected his writing. Both respond at some length to Wohlfarth’s query, and each is sure that Conrad’s medical history had a definite effect upon his fiction. Wohlfarth later donated these papers to the Wellcome Library: they can be consulted as MS.8512. Until recently they have been unknown to Conrad scholars but it is hoped that now they have been catalogued and made visible they will be published as part of a supplement to his collected correspondence.

The lower illustration is taken from The Malay Archipelago by Alfred Russel Wallace. Conrad travelled extensively in the Far East and Wallace’s description of the area was one of his favorite books: his fiction is often set East of Suez, most notably Lord Jim.