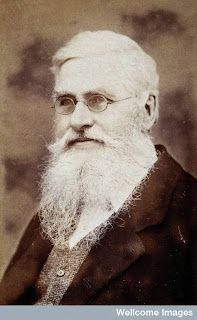 The Wellcome Library’s Archives and Manuscripts department recently purchased a manuscript letter accompanied by a printed pamphlet by Alfred Russel Wallace (1823-1913). This letter has been added to our small group of writings by the great naturalist, explorer, geographer, biologist and anthropologist (see MS.7798 and MS.7830/54-59).

Wallace was virulently against small-pox vaccination and expressed his views in the forthright pamphlet ‘The Army and Navy: A Demonstration of the Uselessness of Vaccination’ published by the National Anti-Vaccination League (c.1898) (MS.7798/5). Slamming the practice of re-vaccinating males entering the military services, Wallace insisted that any reduction in Army and Navy small-pox mortality was due in fact to much better sanitation and a great improvement in the food, general treatment and medical attention. He insists the statistics show that “it is the exceptionally unvaccinated that possess the exceptional advantages, while the ‘exceptionally re-vaccinated’ Army and Navy show quite exceptional disadvantages…” in small-pox mortality over the last twenty years. In addition to being scientifically unproven and insufficiently understood, Wallace claimed that vaccination was dangerous because of the dirty conditions in which it was often carried out. Compulsory vaccination (introduced in 1853) was an “injurious operation”, a “Gigantic Medical Imposture”, and was being promoted by doctors driven by economic interests and a government bent on interfering with personal liberty. 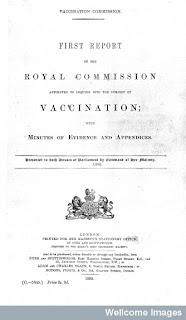 In this pamphlet Wallace keenly criticises the report of the Royal Commission of 1884, which ultimately found that vaccination was effective and should remain compulsory. Interestingly, his attack focuses on the apparent denial, misinterpretation and manipulation of disease and mortality statistics. As we can tell from his letter to William Young on 14th June 1884 (MS.7798/4), Wallace was indeed concerned about using valid and accurate statistics. He tells Young that he cannot put his name to an anti-vaccination pamphlet unless he can personally “verify the facts & figures from the original authorities”. In reality however, ‘lies, damned lies, and statistics’ were used by both pro and anti vaccination camps to support their arguments and disparage each other. The 1884 Royal Commission found discrepancies in the statistical evidence Wallace had submitted and The Lancet pointed out that the 1898 pamphlets he put his name to (including ‘Vaccination a Delusion’) repeated much of the erroneous information that they had condemned in 1884!

It seems that whilst Wallace was right to point out the risks of vaccinating in a filthy environment, and the tangible benefits resulting from improved sanitation, food and medical treatment, he was, it turns out, on the loser’s side of the vaccination issue. Considering Wallace’s interest and opinions covered a wide range of issues it is not surprising that he was instinctively right about some things – natural selection, the impact of human activities on the natural world – but on distinctly dodgy ground with his views on mesmerism, phrenology and spiritualism.