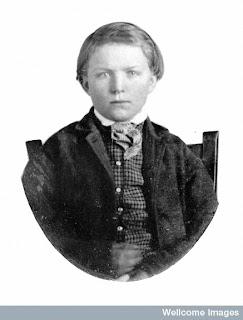 The 21st August marked the anniversary of Sir Henry Wellcome’s birth in 1853. We could use this date to highlight many interesting moments in his life, as revealed through the personal and business papers of his held in the Wellcome Library, or to focus on any of the thousands of items in our holdings which he collected.

Instead, we’ve chosen to focus on the self-described origins of Wellcome’s interest in history, anthropology and collecting.

Born in 1853, the son of a farmer in the Mid West of the United States, Wellcome’s childhood was a rural one. Accounts of his life often focus on his contact with Native American culture, and the time spent learning about medicine in his Uncle’s drugstore.

Arguably though, the other key moment in the young Henry’s life took place when he was 4 years old. Over 70 years later – whilst giving evidence to a Royal Commission on Museums – Wellcome recounted this moment, when he was asked to describe how his interest in the history of medicine and anthropology was first awakened. He replied: 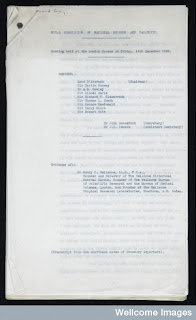 “…it was almost in my infancy. When I was four years old, I got my first object lesson from a Neolithic stone implement which I found; and my father explained to me the different periods of the Stone Age, and the great improvements of this late Neolithic period over the more primitive forms of their ancestors. He also explained to me that the perfecting of this late Neolithic implement meant more to those ancient peoples for their protection and as a means of gaining their livelihood than the invention of the electric telegraph or the steam railway engine meant to us. This excited my imagination and was never forgotten…”.
(Royal Commission at the London Museum on Friday 14th December 1928 (WA/HSW/OR/L.2))

Wellcome places a good of deal emphasis on this find, suggesting that this implement was the inspiration for his interest in history, which by 1928 had resulted in an astonishing array of objects – well on the way to the 1 million objects it’s been estimated he had amassed by his death in 1936.

As far as can be ascertained though, this childhood find of Wellcome’s was never exhibited at the Wellcome Historical Medical Museum, nor was it part of Wellcome’s personal effects when he died.

It doesn’t appear to be part of the Wellcome medical collection at the Science Museum, suggesting that this object may have been passed on to another institution (though given the slightly romanticised air of Wellcome’s account, we should wonder if the object ever existed at all).

If the object was as important to Wellcome as his evidence suggests, then if it wasn’t for this find, the Wellcome Library and Wellcome Collection might not even be in existence.

Is this too much influence for a small, primitive tool? Whilst it might be going too far to suggest this implement offers a complete explanation for Wellcome’s collecting habits, and somehow explains his personality, this elusive object illustrates the emotions and meanings collectors can ascribe to their holdings.

It also brings to mind another (albeit fictional) American businessman from the turn of the twentieth century who amassed a vast collection of objects (the key item of which was not retained).

(Wellcome’s collecting is the subject of the forthcoming An Infinity of Things: How Henry Wellcome Collected the World by Frances Larson (OUP, 2009) – more details on this book in future posts).