My Lord Mayor, Aldermen and Members of the Council,

I have the honour to submit my Report on the health of the City of Manchester for the year 1918. The chief fact of the year, so far as the death-rate is concerned, is the disastrous incidence of Influenza, which caused well over 2,000 deaths. Much more investigation and administrative provision will have to be made before such visitations can be seriously mitigated

So begins the Annual Report for 1918, of the Medical Officer of Health for Manchester, Dr James Niven.

Niven’s attempts to combat the spread of this influenza – now remembered as ‘Spanish Flu’ – formed the basis of Spanish Flu: The Forgotten Fallen, which was broadcast last night as part of BBC4’s War Beneath the Skin season. 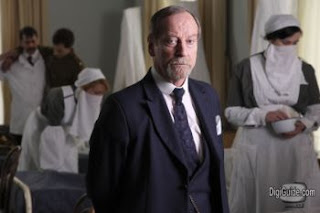 The Forgotten Fallen was partly funded by the Wellcome Trust, and the resources of the Wellcome Library – along with other libraries and museums – were utilised by its makers.

Although the programme makers acknowledge that scenes in the film were created for dramatic effect, the drama is rooted in surviving records from the period.

As a Medical Officer of Health – local government appointed figures, who were charged with investigating and controlling local outbreaks of disease – Niven had to compile an annual report of his work and the health of the area he was responsible for. The Wellcome Library has one of the largest collection of Medical Officer of Health reports in the United Kingdom – covering over 2,800 locations, numbering over 70,000 reports in total.

These reports add up to a continuous record of public health activity from the 1850s to the 1970s, and are one of the richest sources available for tracing patterns of disease and social conditions in this country. Here can be found detailed accounts of how infectious diseases affected local districts, and how Medical Officers of Health attempted to improve the health and wellbeing of their areas.

In the case of Niven, his advice on influenza – taken from his Report for 1918 – could be from Government literature on Swine Flu in 2009:

So far as one can judge at present, in checking further outbreaks, it will be necessary to rely chiefly on general preventative measures. The measures alluded to include the maintenance of a reasonable distance between the sick and the healthy, care of the hands, avoidance of common towels and common soap, careful washing out of common basins, avoidance of the handling in common of food to be afterwards cooked, and other like precautions; above all, the immediate segregation of persons attacked.

(Spanish Flu: The Forgotten Fallen is available to watch through the BBC’s iPlayer).