Thoughts for the weekend 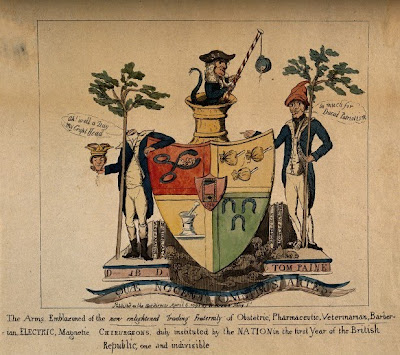 Here is a crisply expressed idea about medical history:

In defining primary sources, context is important. A historian must strive to situate the topic in time and place. No medical subject—be it a person, a practice, an institution, a technology, or an idea—can be fully explored without also studying its political, social, economic, and cultural environment. Sometimes the environmental conditions are revealed by contrasting them with those elsewhere. For example, revolution or famine in one country will influence its medicine, while the medicine of another country which may be enjoying peace and prosperity will not be so affected.

Above: a hand coloured engraving from 1798, showing a mock coat of arms for a revolutionary British guild or college combining surgeons, obstetricians, quack doctors, barbers, veterinarians, apothecaries etc., supposed to be instituted in year 1 of the British Revolution (on the model of the French Revolution). The supporters are (on the sinister side) Francis Russell, 5th Duke of Bedford, who was the leading supporter in the House of Lords of Charles James Fox and the radicals, and (on the dexter side) Tom Paine, author of Rights of man (1791). Wellcome Library no. 12185i

The British Revolution did not happen: the imagined united college in which all health practitioners would be democratic equals never came into being.

And while it’s at hand, here’s another quotation from the same “scandalously short” book (p. 374):

Never use the word ‘progress’. If you feel an urge to do so, ask yourself why you think it is necessary and what you might really be avoiding. Take a deep breath, and if that doesn’t work, take a Valium.

(This blog does not endorse that last clause, except as a “primary source” of medical history in its own right.)