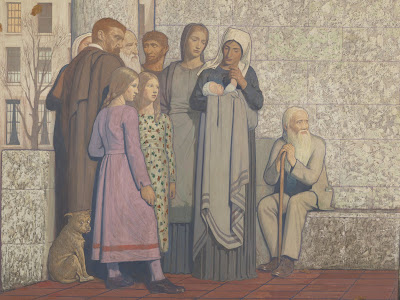 An article by Peyton Skipwith in the current issue of Country Life discusses the four large paintings by Frederick Cayley Robinson which are displayed at the entrance to the Wellcome Library. [1]

The author calls Cayley Robinson “that rare phenomenon—an English Symbolist painter”. He identifies features of the Wellcome Library paintings which are handled with variations in other paintings by the artist, such as the L-shaped compositions, or subjects of innocence and experience, and sums it up as “a four-part pictorial-Theosophical cycle concerned with sympathy and compassion”. Theosophical? In the group shown above, the figures wear costumes from several different eras, and given that the seated old man also appears in one of Cayley Robinson’s ancient Egyptian scenes, one can certainly see him as a continually reincarnated figure appearing, like the Wandering Jew or the Flying Dutchman, as an eternally recurrent presence in the doctor’s waiting-room of earthly existence.

Mr Skipwith also suggests that the girl being presented to the doctor in the second pair of paintings is to be understood as one of the orphans shown in the first pair. This has also been suggested verbally by another observer, the artist James Broomfield, and it would satisfactorily link the two pairs. 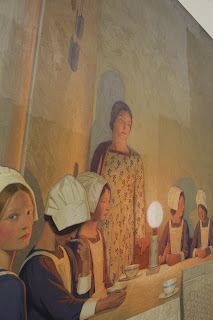 During the summer of 2009 the four paintings were cleaned, and a large amount of surface dirt was removed that had inevitably accumulated during the seventy years in which the paintings had been displayed at the entrance to the Middlesex Hospital (even though they had been protected there by glass). The difference between the cleaned area above and the uncleaned area below is shown on the left.

After cleaning the purple outlines around the figures make them seem more unearthly, the artist’s meticulously drawn squaring-up is more visible, and the greens, violets and whites (suffragette livery!) shine out more strongly against the drab surroundings. And look at those blues below! 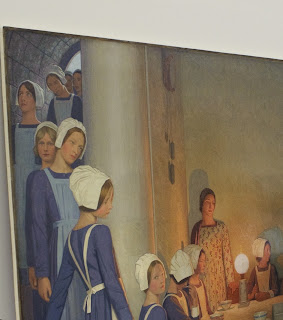