Two empresses and their sons 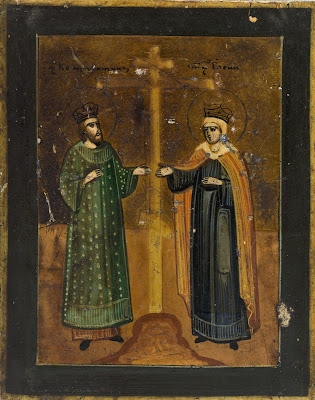 SS. Constantine and Helena. Russian painting on wood.
Wellcome Library no. 34400i

Empresses are rarely encountered. However a small Russian painting in the Wellcome Library records a bond between two empresses who lived fifteen centuries apart. As will be seen, 4 September is an apt date on which to publish it.

The Roman Empress Helena (ca. 246/50-330) was the consort of the Emperor Constantius, and the mother of the first Christian emperor, Constantine (ca. 272-337). The painting shows her on the right, with her son Constantine on the left. Constantius divorced her or separated from her and remarried for political reasons, abandoning Helena and depriving her of imperial honours. When Constantius died in York in 306, Constantine (also then in York) succeeded him, and restored his mother to her previous status in the imperial court in Byzantium.

As the mother of the new Emperor, Helena supported Constantine in the promotion of Christianity throughout the empire, and devoted herself to the recovery of the relics of Christ’s Passion in Jerusalem, particularly the excavation of the Cross. 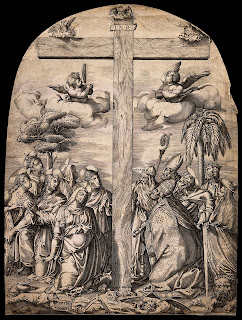 Hence, in the engraving shown here, Helena and Constantine are the figures closest to the Cross, Helena on the left and Constantine with a full beard on the right, both of them wearing imperial crowns (click on the image to enlarge it). Helena died in Byzantium in 330 in the presence of her son.

The Wellcome Library painting of Constantine and Helena is a Russian icon. The two saints are named as “Святыи Цар Константин” and “Святая Царица Елена” (the Holy Emperor Constantine and the Holy Empress Elena). Between the two figures is the Cross. The Cross had been the subject of a dream in which Constantine had been told “In hoc signo vinces” (“In this sign you shall conquer”). A relic believed to be the original Cross had, as we have seen, been discovered by Helena in Jerusalem. Neither the subject nor the manner of depiction is particularly rare. What is distinctive about the painting is its provenance. Before it was acquired by Henry S. Wellcome, it had belonged to another empress: Empress Eugénie of the French (1826-1920), consort of the Emperor Napoleon III (1808-1873). 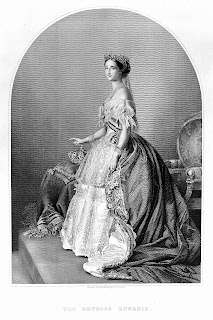 Eugénie was a Spanish countess whose mother was of Scottish and Belgian parentage. In 1853 she married Napoleon III. He had lived in various places (on Lake Constance in Switzerland; Leamington Spa, Warwickshire; Southport, Lancashire; New York City) before returning to France in 1848 to take up the presidency and in 1852 the Imperial throne.

Napoleon III’s reign was eventful. He provoked the Franco-Prussian War in 1870, only to end up losing it and himself a prisoner of war after being captured at the battle of Sedan. He returned to England and settled with his wife at Chislehurst in Kent. There they lived with their son, Napoleon Eugène Louis Jean Joseph Bonaparte, the Prince Imperial, who had been born in 1856. It was at Chislehurst that Napoleon III died in 1873, weakened by a sequence of three surgical operations performed in an attempt to break up a huge bladder stone. 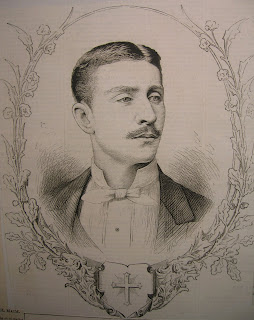 The exiled Eugénie was not so fortunate in the career of her son, Prince Louis Napoleon, as Helena had been in the support of her son, Constantine. Louis Napoleon joined the British army and was keen to see action in the Zulu War. On 1 June 1879 he took part in an expedition outside the camp. He and his party were ambushed by some forty Zulu: most of the other soldiers got away, but the Prince Imperial was unlucky. His dead body was discovered the following morning riddled with spear wounds.

The reaction around the world was comparable (mutatis mutandis) to the shock at the death of Diana Princess of Wales in 1997. Eugénie was of course devastated. In 1880 she went to South Africa to visit the spot where he had been killed.

On her return to England she left Chislehurst and moved to Farnborough in Hampshire, where her remains of her son’s body were interred with his father. There she involved herself in good causes, including women’s suffrage, improving the treatment of young offenders, and children’s charities, as well as radio, electrification, motor cars, her complicated family relationships, and a close friendship with the Queen. In World War I she turned a wing of her house into a convalescent home for wounded soldiers.

Right: the Empress Eugénie mourning her late son the Prince Imperial. Colour lithograph by F. Betbeder, 1879. Wellcome Library no. 575546i

Among her many possessions was the icon of Helena and Constantine which is now in the Wellcome Library. In gazing on the likeness of her fellow-empress, Eugénie could recognize in several respects a kindred spirit. The island named after St Helena, to which her husband’s uncle Napoleon I had been exiled, was often in her thoughts: violets from the island decorated her sitting room. Eugénie was also linked with Helena through the True Cross, for Eugénie was the guardian of a relic believed to be a fragment of the Cross which Helena had excavated. This sliver of wood, glazed with a pale green gemstone and housed with other relics in a Gothic iron chasse, was believed to have been buried with Charlemagne; the Emperor Charles V had had it placed in the treasury at Aachen, from which it passed to Napoleon I and thence through his step-daughter Hortense de Beauharnais to Eugénie. It was the only item which Eugénie had managed to save from the Tuileries when she was forced to flee the howling mob surrounding the palace on 4 September 1870, and it received an honoured place in the chapel at Farnborough Hill. Through a continuous line of individuals and families, from Jerusalem to Byzantium, from the first Holy Roman Emperor in Aachen to the Empress of the French in the rolling Hampshire countryside, “westward the course of Empire takes its way”, in Berkeley‘s words.

On the other hand, the sight of Helena standing side by side with her son could arouse more melancholy thoughts. Unlike Constantine, Eugénie’s son never succeeded his father as Emperor. Unlike Helena, Eugénie herself was never restored to her former imperial glory. The icon reassured because it represented a fond ideal to be cherished, rather than the sorrowful reality. And just as the icon commemorated Helena and Constantine long after their deaths, so perhaps Eugénie and her son would be remembered in centuries to come. That certainly seems to be the intention of the person who placed the icon in a box lettered “La belle fleur de mémoire”. And, as we read about them here, we cultivate that flower of remembrance. 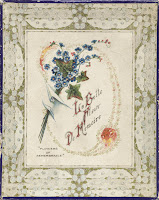 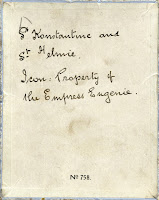 A note on the provenance

The box (above left and right) is inscribed and is accompanied by a letter from Mr Norman H. Greatorex, 13 The Hostel, Newburn Street, London S.E. 11, offering the painting to Queen Mary, consort of King George V of the United Kingdom. The letter states “These belonged to the Empress Eugénie & came from Farnborough Hill after she died there. I bought them at Guildford for 10/-“. A letter to Mr Greatorex from a Lady in Waiting declined the gift “as the Queen does not collect icons”. “These” in the the letter presumably refers to the painting and the box.