It was on 15 September 1986 that the Wellcome Institute received a letter from the London art dealer David Salmon, who ran a shop called David Tremayne Ltd towards the western end of the King’s Road in Chelsea. He had something which he thought would be of interest. Tremayne was not one of the Wellcome Institute Library’s regular suppliers, but an appointment was made for 3.30 pm on Monday 13 October, and one of the Wellcome Institute’s curators duly attended the shop at that time, on this day in 1986. The shop was filled with sculptures and textiles from Nepal, from which Mr Salmon had recently returned, and he was evidently a specialist in Nepali art. And it was a painting from Nepal that he wished to show the Library. 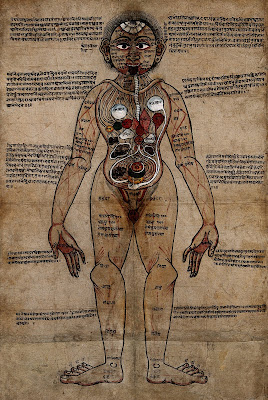 It was certainly an extraordinary sight. About equivalent to A2 in size (60 x 42 cm.), the figure was not exactly as shown in the traditional “Alexandrian series”, nor did it obviously fall into any style of Hindu art that would be readily recognizable to a non-expert. The nearest resemblance was to Nepali diagrams of chakras, showing the passage of Kundalini forces through them and around the body; but those do not show discrete organs. [1] Nor was it, or anything like it, shown in standard reference books such as Herrlinger and Putscher’s two-volume history of medical illustration. The price was substantial (£1,750), and would wipe out most of the remaining funds in the acquisitions budget, but given the painting’s rarity and good condition, would not be out of line with the market. The Wellcome Library did therefore agree to buy it, and when the funds had been transferred, the painting made its final journey from the King’s Road to the Wellcome Library in the Euston Road on 26 October 1986.

There over the years it was frequently reproduced, exhibited and commented on, but the uniqueness which had made it desirable in the first place also made it difficult to understand. Now however two articles have appeared in quick succession which shed light on its content and context.

In his article in Asian medicine, Dr Dominik Wujastyk identifies the lettering surrounding the work as verses from a classic Ayurvedic work called Bhāvaprakāśa by Bhāvamiśra (fl. ca. 1650–1690). [2] Bhāvamiśra is thought to have been born near Madras (Chennai) and to have worked in Benares (Varanasi). The extracts are taken from chapter 3 of his work, that deals with anatomy and embryology. The verses on and around the painting do not function as tightly-integrated labels to the body image, but rather as reflections on related anatomical issues. Most of the texts (in Sanskrit and other Indic tongues) are garbled, suggesting that they might have been copied from an earlier version of the painting now untraced, by someone who did not understand what was being transcribed. Dr Wujastyk provides an image, a transliteration and a translation of each of the blocks of text.

The parts depicted and described by Bhāvamiśra by do not necessarily correspond one-to-one with organs of the body familiar to those brought up with Traditional Western Medicine or its present day derivatives. For instance the sequence of parts involved in digestion and excretion includes numerous “receptacles” (of wind, of impurities, of urine, of phlegm, of raw matter, of digested food etc.) that are not necessarily identifiable with specific service stations along the highway of the western alimentary canal. Likewise there are separate names for two separate parts between the ankle and the heel, which have no western names. The two lungs, regarded in the west as identical organs in reverse, have two different and unrelated names in Sanskrit, and both organs are given different functions from respiration.

The descriptions explain the functions of the parts in vivid terms. The humour Bile is described as “Cook, dyer, reacher, illuminator and shiner”, each function depending on its location in the body, while the humour Phlegm is described as “Moistener, dripper, taster, oiler and gluer”, again according to location.

For further analysis please see the article, which includes an extensive bibliography. A hard copy of the journal is available in the Wellcome Library , and an electronic version is available free from the e-repository of University College London.

The same painting has re-appeared in an article in a new journal from Buenos Aires: Eä – Revista de humanidades médicas & estudios sociales de la ciencia y la tecnología [3]. The electronic article is available free on the publisher’s website, supported by SAHIME, the Argentinean Association for the History of Medicine. The author emphasizes the difference between the understanding of functions according to Ayurvedic teaching and according to the western anatomy introduced into India by Imperial colonisers. The Wellcome painting expresses the Ayurvedic doctrine rather than colonial anatomy derived from French eighteenth- and early nineteenth-century pathology. The article contains some interesting quotations from both sides.

[2] Dominik Wujastyk, ‘A body of knowledge: the Wellcome Ayurvedic anatomical man and his Sanskrit context’, Asian Medicine: tradition and modernity 4 (2008): 201-248