It’s Monday and the week gets off to a good start: the next job lined up is to catalogue a collection of unknown mezzotints. These have been in the Wellcome Library for at least seventy years but have only recently been put into folders by a work-experience student (thank you Tim Brown from St Cecilia’s School), and are therefore now in a well enough ordered state to be catalogued.

The wilder and more gloomy mezzotints from the reign of King George III are associated with the “gothick” aspect of the Romantic Movement. This folder reveals a superb example, dated 1785: a woman telling a dramatic tale to a group of terrified young women and girls on a wintry night. 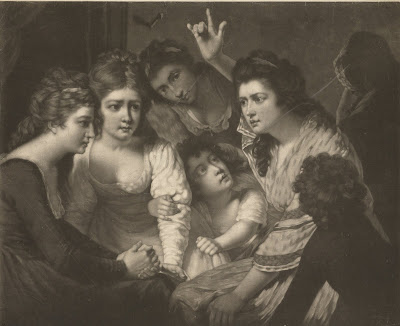 Hello, what’s this? Something completely different. 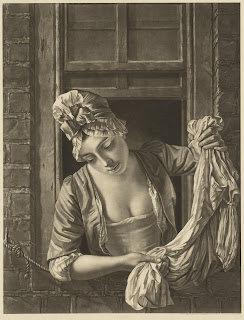 A laundry maid about to squeeze a wet shirt out of the window. She looks down toward the street, we hope to make sure that nobody is walking underneath. The Georgian sash-window is minutely depicted: click on the image to relish the detail. The composition is of Philip Dawe’s 1774 mezzotint of The laundry maid, after a painting by his friend Henry Morland.

An impression of the original mezzotint was offered for sale earlier this year at Christie’s South Kensington (Christopher Lennox-Boyd sale, 25 February 2009 lot 1161).

However, in the present example, the paper is smooth and shiny, and the original 18th century lettering is missing: that means that it’s a reproduction, not an original. Being of lesser importance, it can be put to the bottom of the cataloguing pile. In this one, the original lettering has been replaced by “Rembrandt Intaglio Printing Co. Ltd., Lancaster”.

Goodness, what have we here? 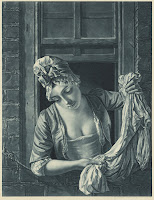 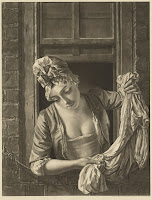 Questions crowd in. Why so many impressions? What on earth was the “Rembrandt Intaglio Printing Co.”? Why was it based in Lancaster? And was that Lancaster in Lancashire or Lancaster in Pennsylvania, or one of the many other Lancasters?

By combining data (critically of course) from the websites of Lancashire Museums Service and Sun Printers in Watford we discover the improbable story of the Rembrandt Intaglio Printing Co. It starts with a Viennese of Bohemian origin called Karel Václav Klíč (1841-1926). Klíč seems to have been an inspired caricaturist, painter in oils, and inventor who devised a way of making photogravure plates that could be printed on a rotary press (wrapped around a cylinder) rather than on the usual flat-bed press.[1] He made no commercial advance with his discovery until he brought it to England in 1895 and offered his process to a textile-printing company called Storey’s in Lancaster, the family firm of Sir Thomas Storey. The managers at Storey’s put Klíč together with their technical expert, a Lancastrian called Samuel Fawcett, and as a result of their synergy, the firm really took off. They formed a separate company within Storey’s called Rembrandt Intaglio Printing Co., specialising in printing reproductions of old masters using Klíč’s rotary photogravure process. The firm was very successful. In 1926 Rembrandt Intaglio moved from Lancaster to Norwood near London, and eventually became part of the massive complex of printing companies in and around Watford.

Two pictures neatly encapsulate this narrative. Lancaster City Museum has a portrait of the company owner Sir Thomas Storey painted by Klič (recorded in the relatively new database of the National Inventory of Continental European Paintings in the UK); and Sun Printers website includes this photograph

from their archives of Klíč with his arm round Fawcett, from a group photograph of their staff in 1906. It looks as if Klíč has been celebrating their success in an appropriate fashion.

So this “reproduction of lesser importance” is one of Klíč and Fawcett’s actual products: an incunable of rotary photogravure! And the Lancaster imprint means that it dates from the period before they moved south. The fact that Henry S. Wellcome’s collection includes several impressions in different colours suggests that they were sent to him as printing samples, to show what Storey’s firm could do: with its large packaging and publicity output, the Wellcome pharmaceutical company was a big print-buyer. Purchasers of Rembrandt Intaglio prints must have been amazed at the fidelity of their photogravures to the original mezzotints. The lettering was presumably omitted because it was customary to trim the lettering off mezzotints when framing them (as has happened with the mezzotint of the girls listening to the horror story, reproduced above).

And what looked like a Monday morning with eighteenth-century mezzotints has opened out into an interesting lesson in technology transfer. For Karel Václav Klíč was not the first Viennese to introduce a printing advance into England. A recent posting on this blog described a process called “photogalvanography” which was introduced into England in 1854 by Paul Pretsch from Vienna. The “photogalvanograph” by Pretsch sits in the Wellcome Library on the next shelf to the blue and brown “mezzotintogravures” (to coin a phrase) invented by Klíč. Citizens of the Austro-Hungarian Empire have made a substantial contribution to the technology of printing and therefore of communications. To think what we in western Europe missed during that far too long period of the Warsaw Pact, when communication was impeded between Central/Eastern Europe and the United Kingdom!