Jesty in Dorchester: Return of the native 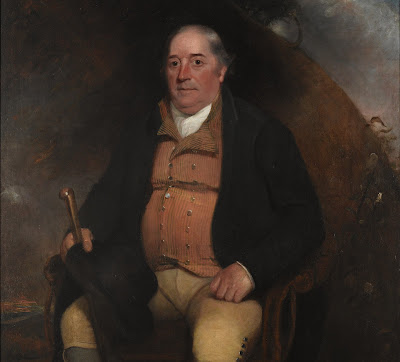 Detail of painting of Benjamin Jesty by Michael William Sharp, 1805.
Wellcome Library no. 654136i

In 2006 the Wellcome Library repatriated from South Africa the portrait of Benjamin Jesty, a farmer who practised vaccination in Dorset in 1774, twenty-two years before Edward Jenner conducted his first experiment with vaccination. The portrait had been commissioned in honour of Jesty in 1805 by the Original Vaccine Pock Institution, and was painted from the life. Its whereabouts later became unknown to researchers, until in 2004 it was located by Patrick Pead in a farmhouse on a large estate in the Eastern Cape, South Africa.

The portrait is now on loan from the Wellcome Library to Dorset County Museum as the centrepiece of the exhibition Benjamin Jesty: Dorset’s Vaccination Pioneer at Dorset County Museum, High West Street, Dorchester, Dorset DT1 1XA. The exhibition was opened on 26 October 2009 by Professor Frances Gotch, Professor in Immunology at Imperial College, London, an authority on vaccines against AIDS, smallpox and other diseases, and a relative of Benjamin Jesty. It is open until the end of February 2010. Also on display in Dorchester are documents related to the painting, objects documenting the history of vaccination, and the museum’s wide-ranging collection. There is an entrance charge: see Dorset County Museum’s website for details.

The exhibition marks the 30th anniversary of the announcement on 26 October 1979 in Nairobi by Dr Halfdan Mahler of the World Health Organization that the global eradication of smallpox was complete. The opening of the exhibition also coincided with the UK government’s roll-out of 4.4 million doses of H1N1 swine-flu vaccine to GPs for high-risk groups. Both events have their historical roots in Jesty’s actions in Dorset in 1774. The remarkable story of Jesty’s innovation is recounted in Patrick Pead’s new book Benjamin Jesty: Dorset’s vaccination pioneer (Chichester: Timefile Books, 2009, ISBN 9780955156113, email tfbooks@hotmail.co.uk). 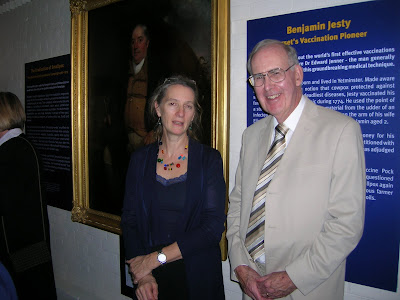 Above: Amanda Paulley (the conservator who restored the the painting for the Wellcome Library), and Patrick Pead (the rediscoverer of the painting and author of the new book on Benjamin Jesty), with the portrait at the opening of the exhibition

One Response to Jesty in Dorchester: Return of the native