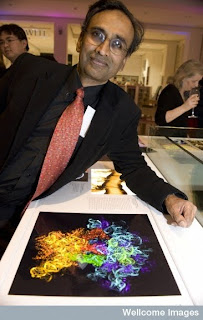 Wellcome Image Award winner and current Wellcome Trust grant holder, Venkatraman (Venki) Ramakrishnan, has been named as one of the winners of the Nobel Prize in Chemistry 2009.

Venki’s computer-generated molecular model of a ribosome, showing its 3D structure in great detail, impressed the judges of the Wellcome Image Awards in 2008. It is for his research on the structure and function of the ribosome, which converts DNA information into proteins, that the Nobel Prize has been awarded.

Specifically, it is Venki’s use of X-ray crystallography to map the atomic structure that has been recognised. This technique has advanced from the standard X-ray, early examples of which are held in the Library’s collections.

Venki’s Wellcome Award-winning image, the accompanying protein-synthesis animation and a recording of Venki describing his image, background and research are available online.

One Response to Proteins and Prizes