By Ross Macfarlane | From the Collections, In the Library

Exquisite Bodies, the Wellcome Collection exhibition which closes this Sunday, aims to provide a history of the anatomical model in the nineteenth century. The show begins however, with an introduction to anatomical museums in the eighteenth century.

One of the first items on display is the Wellcome Library’s copy of A descriptive catalogue … of Rackstrow’s Museum: consisting of a large, and very valuable collection, of most curious anatomical figures, and real preparations … with a great variety of natural and artificial curiosities. To be seen at no. 197 Fleet-Street … London.

Rackstrow’s was one of the most (in)famous museums of its kind in late eighteenth century London. Surviving catalogues give us not only an overview of its proclaimed contents, but also an insight into contemporary tastes. (Its most famous exhibit in its early years was a wax model figure of a heavily pregnant woman, with red liquors passing through its glass veins to illustrate the circulation of the blood).

The Anatomical Collection contained the majority of objects in the Museum (74 out of the 117 items listed in the 1784 catalogue), and was a mix of waxwork models and specimens preserved in spirit. Here then, were to be found “diseased wombs”; “children still-born, preserved in spirit”; “miscarriages or abortions”; “monstrous births, from women” (but also “from beasts”, such as cows, ducks, cats and dogs).

A sense of the museum’s scale is given by the “astonishing skeleton of a Spermi-Ceti Whale, measuring seventy-two feet in length”, and of its enterprising nature by the fact that not only was an “An ancient Mummy, in its original coffin” exhibited, but a “fine print” of the Mummy was also available for purchase. 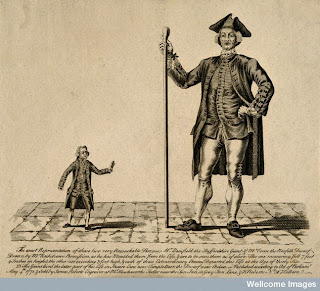 The “Natural and Artificial Rarities”, consisted of preserved animals “Dried and in Spirits”. Here, the paying customer would come face to face with (amongst others) an armadillo, a porcupine, a shark and two crocodiles. The “Collection of Figures resembling Life”, lends a regal air to the medico-menagerie; with a bust of George III sharing space with “a grand figure of George II” but also harks back to the extremes of life from the start of the Museum, with moulds taken from life of the recently deceased Mr Bamford (“the Staffordshire Giant”) and Mr Coan (“the Norfolk Dwarf”).

The Museum lasted until the 19th Century, during which time this part of Fleet Street became associated in fiction with a different form of anatomical study. Rackstrow’s address of 197 Fleet Street no longer registers on the mental landscape, but the fictional resident of 186 Fleet Street certainly does.

(Catalogues for Rackstrow’s Museum are available through Eighteenth Century Collections Online, one of the online resources available free of charge to Wellcome Library readers).