The Exhibition of Living Patients, 1881 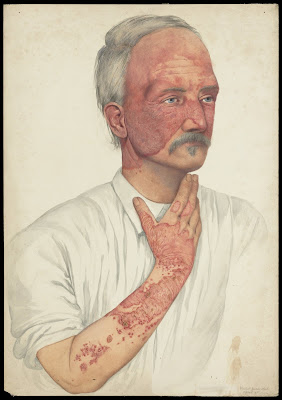 A man with Lupus erythematosus. Watercolour by Mabel Green, 1902.
Wellcome Library no. 672807i

The International Medical Congress which took place in London in 1881 was the seventh in the series, sandwiched between the sixth congress in Amsterdam and the eighth in Copenhagen. It was a crystallization of the medical knowledge of the time. Some 3,000 people attended from every continent. The four massive volumes of its Transactions make fascinating reading for the historian, and no doubt also for the historically-minded clinician.

The organizers of the Congress decided to include among the attractions a museum in which specimens of one sort or another could be shown. These were mainly drawings, photographs and casts, but in addition there were two special exhibits. The renowned neurologist Jean-Martin Charcot (1825-1893) brought over from Paris a life-size wax model of a recumbent woman with locomotor ataxy and disordered joints, together with her preserved skeleton, illustrating one of Charcot’s many clinical discoveries; and Jonathan Hutchinson, the chairman of the Museum Committee, organized an “Exhibition of Living Patients”.

The Exhibition of Living Patients was something of an experiment, and it turned out to be a victim of its own success. It was allotted one of two rooms (the museum room and the boardroom) of the Geological Society, one of the Learned Societies which have been housed since 1874 in magnificent buildings around the courtyard of Burlington House on Piccadilly. 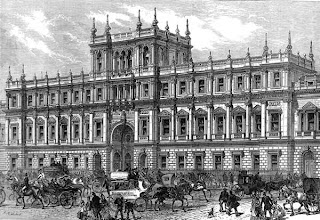 Right: Burlington House and Piccadilly. Wood engraving, Illustrated London news, 1873. The Geological Society’s rooms are on the right of the entrance archway.

According to Hutchinson there was “confusion and crowding … Our exhibition was more popular than we had expected: every morning at the hour announced, the room filled. The weather chanced to be very hot [this was the first week of August], and as the room looked into Piccadilly, it was exceedingly noisy.” One of the reasons for the noise was that, while the hubbub of Piccadilly entered through the open windows, not only did the doctors presenting their patients have to speak over it but at the same time visitors were continually jostling in and out of the crowded room. [1] 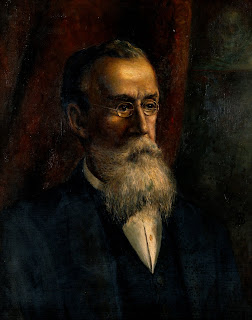 Left: Jonathan Hutchinson. Oil painting by W. Swainson, one of the artists who produced pathological illustrations for Hutchinson. Wellcome Library no. 45691i

For those who could get near it, the exhibition was evidently quite a sight. Beneath the chandeliers in the fine rooms sat seven patients with leprosy, four of them supplied by Hutchinson. Six patients with diseases designated as myxoedema sat in a row and “the peculiarities of their features, and the sameness in their peculiarities, became very conspicuous”. There were also many cases diagnosed as Lupus, a disease which fascinated connoisseurs of clinical conundrums. In Hutchinson’s words:

All the varieties of Lupus Erythematosus were plentifully illustrated by cases produced by Mr Malcolm Morris, Mr James Startin, Mr Waren Tay, and myself. Some of the cases were very exceptional ones. Several were of the form known as lupus sebaceus; and of these, two showed the remarkable tendency to occur in the concha of the ear (symmetrically) just where a group of glands is placed, which are often the site of comedones. Other exceptional forms of Lupus, especially Lupus of Mucous Membranes, and the punctate form known as Acne Lupus, were also illustrated. In several of these cases, portraits showing the state of the disease several years before were placed by the side of the patient, thus making the cases more than doubly instructive.

One of the visitors to the museum was the young Professor William Osler from McGill University in Montreal, who recorded his experience of the congress in the Canada medical and surgical journal [2]. Osler described the museum as follows:


For working purposes the Congress divided into fifteen sections, the meetings of which took place in the rooms of the various learned societies at Burlington House and of London University, and one or two other contiguous institutions. One of the most instructive parts of the congress was the Museum, held in the Geological Society’s rooms. This consisted of illustrations of disease in the living subject, as well as a large assortment of rare and interesting prepared specimens. … Mr Jonathan Hutchinson had a number of cases each morning, and his demonstrations on leprosy, rheumatic arthritis and inherited syphilis attracted large audiences. Rare forms of skin diseases were exhibited by many of the leading dermatologists. The museum of specimens contained about 700 examples of interesting and rare illustrations of morbid anatomy. … The walls of the rooms in which the specimens were collected were covered with coloured drawings. Among the most remarkable of these was a set of watercolours by Sir Chas. Bell, illustrating gunshot and other wounds seen by him after Waterloo. Mr Hutchinson’s enormous collection attracted particular attention, and illustrated most of the special departments in which he has become so famous. What struck me as most remarkable among them was a set illustrating eruptions due to iodide and bromide of potassium, particularly two portraits of a man, the subject of an extensive eruption of tuberous masses on the skin, many of them ulcerated. … Several beautiful coloured drawings by Raphael of Montreal were exhibited by our townsman, Dr Roddick. An excellent catalogue greatly facilitated the inspection of the specimens, and perhaps as much direct benefit to the working members of congress was obtained during the time spent in the museum as in any of the other departments.

The watercolour of a man with Lupus erythematosus shown above is one of twenty-six watercolours which have recently been acquired by the Wellcome Library and which are believed to be strays from Jonathan Hutchinson’s “Clinical Museum”, though their connection with Hutchinson is at present only circumstantial. The Oxford dictionary of national biography says of Hutchinson “His vast collection of pathological drawings was probably unequalled.” The artist of this watercolour, Mabel Green, was one of the small band of artists who worked for Hutchinson. After Hutchinson’s death in 1913 most of his watercolours were sold, and they were acquired in 1915 for the Hospital of Johns Hopkins University in Baltimore: the acquisition was celebrated by William Osler (by now Regius Professor of Medicine at Oxford) some thirty years after his first sight of them in Piccadilly. [3] They are now in the Institute of the History of Medicine at Johns Hopkins. The reason why the Wellcome watercolours did not join them is currently obscure. Another of them, also by Mabel Green, is shown below, and the catalogue records for all the 26 drawings in the Wellcome Library will be found in the Wellcome Library catalogue. 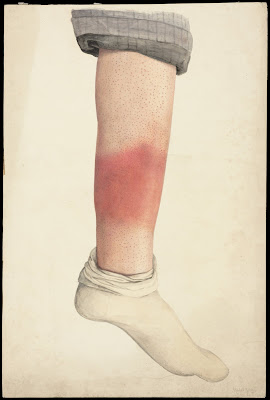 2 comments on The Exhibition of Living Patients, 1881