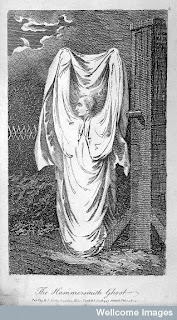 To mark Halloween, the following post relates the story of the Hammersmith Ghost – one of the more famous ghost sightings of the nineteenth century. This case captured the public imagination and representations of the ghost through engravings (see left) and magic lantern shows, were repeatedly made throughout the 1800s.

During December 1803, an apparition dressed in white was reported as haunting the neighbourhood of Hammersmith, on the outskirts of London. It was said a locksmith had died of fright, and two other locals were close to death from the shock of seeing the ghost (which rumour had it, was the spirit of a local man who had committed suicide a year or so earlier).

The panic caused was so great that a group of young men took to patrolling the area looking for the ghost. On the evening of 3rd January 1804, James Smith, an Excise Officer, fuelled into action after an evening in a local pub, caught site of a pale dressed figure in Black Lion Lane. He called out for the figure to identify himself. When no answer came, he opened fire. When Smith came to the prone figure, he discovered he had shot not a ghost, but a local bricklayer, Thomas Milward, whose white working clothes had been misinterpreted by Smith as the garb of the Hammersmith Ghost.

When Smith realised he had killed a man, he gave himself up to the authorities. He was found guilty at the Old Baliley of mudering Milward and was sentenced to death (though in July 1804 he was pardoned and released).

But what of the Hammersmith Ghost? No doubt in remorse after the shooting of Thomas Milward, a local shoemaker named Graham appeared before the Hammermsith magistrates’ office and confessed that he was the original ghost. The Morning Advertiser, dated 10th January 1804, reported his confession at the magistrates’ office, with Graham stating he was angered that the apprentices at his shoemaking business had taken to frightening his children with ghost stories. To teach them a lesson, Graham wrapped a blanket around himself and appeared in front of the apprentices on their journey home… So causing the panic that would eventually result in the death of Thomas Milward.

(A full account of the Hammersmith Ghost – and a reproduction of the image shown above – is given in Owen Davies’s The Haunted: A Social History of Ghosts (Palgrave Macmillan, 2007)).