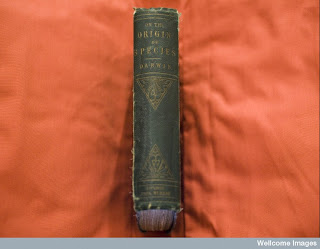 Today is the 150th anniversary of the publication of Charles Darwin’s On the Origin of Species. This first edition consisted of 1,250 copies, with the rapid success of the book leading to a second edition of 3,000 copies being brought out in January 1860.

First editions of Origin of Species still crop up at auction – for example, an auction of a copy, scheduled for today at Christie’s in London, has caught the attention of the media.

Pictured above is the first edition of Origin owned by the Wellcome Library. Details from the Library’s accession registers, state that this copy was purchased on 31st October 1962 from the booksellers H K Elliot, for the sum of £42.

As for Charles Darwin, 150 years ago today he was away from his home at Down House, staying in Ikley Moor in Yorkshire. There, he sought the water treatment, for the ill-health which plagued his adult life.

“In an admirable manner”: Darwinism on the grapevine