We are what we eat. This is most obviously true in the physical sense, but also culturally: our diet expresses our society and encodes a wide variety of cultural influences. Not only does our food say who we are now as a society; it also tells us of where we have been, of the history of our society and its encounters with other cultures, other gastronomic spheres, over time.

This is National Curry Week in the United Kingdom, and it would be hard to find a better example of food as a route into social history. The dominance of curry in the British diet – the Roast Beef of Old England is now eclipsed by Chicken Korma as a favourite dish – is of course the result of Britain’s encounters, by trade and then imperialism, with the Indian Subcontinent. As curry was assimilated into the British diet, it was transformed and becomes a cultural hybrid, located somewhere between the two culinary cultures. The delicate flavours that come from using fresh spices are eclipsed when the nearest fresh cumin is several thousand miles away and the cook is working with dried powders or paste: instead, we end up with a thicker, hotter sauce which becomes, at its most extreme, the brick-red paintstripper favoured as a rite of passage by the weekend beer monster.

It can be a surprise to see how early curry recipes begin to appear in domestic recipe books: long before Britain had a formal empire in India and long, long before mass immigration from the Subcontinent. One of the most influential early cookery books, Hannah Glasse’s The art of cookery, made plain and easy (1748), contains recipes for curries and pilaus:

“To make a Currey the India Way”
TAKE two Fowls or Rabbits, cut them into small Pieces, and three or four small Onions, peeled and cut very small, thirty Pepper Corns, and a large Spoonfull of Rice, brown some Coriander Seeds over the Fire in a clean Shovel, and beat them to Powder, take a Tea Spoonful of Salt, and mix all well together with the Meat, put all together in a Sauce-pan or Stew-pan, with a Pint of Water, let it stew softly till the Meat is enough, then put in a Piece of Fresh Butter, about as big as a large Walnut, shake it well together, and when it is smooth and of a fine Thickness dish it up, and send it to Table. If the Sauce be too thick, add a little more Water before it is done, and more Salt if it wants it. You are to observe the Sauce must be pretty thick.

This is no isolated exotic recipe: below it are two recipes for Pellow (pilau). Each ends with a note of hard-won, presumably bitter experience: the first one reads

You must be sure to take great Care the Rice don’t burn to the Pot. 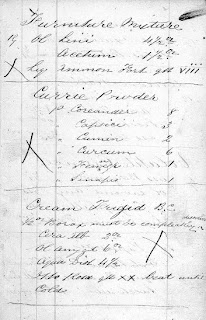 By the nineteenth century, the British love affair with curry is well established. Recipe books in the collection such as MS.7111 contain instructions on how to mix spices to make curry powder. The powder might be applied to a wider variety of meats than we now expect, as we learn from the Johnson family recipe book (MS.3082) compiled during the 18th and early 19th century: on page 148 of this, we read

A curry may be made of Meat, a Rabbit, Fowl or Lobster, cut in limbs or cucumbers. First [fry?] them a light brown, then put it in the Gravy to stew with the Juice of a Large Lemon, a little Salt and one Onion chopt small when almost finished stir in it nearly a large Spoonful of curry powder … Either dish your Rice up by itself or put it on a Dish & put your Curry in the middle – You may Thicken the Gravy with a few Blanchd Almonds.

It is doubtful whether this would be recognised as curry by anyone east of Suez, but such recipes added variety to the native diet and hinted at the great networks of trade and empire that fanned out from Britain at this time. Within this country, recipes would be exchanged and disseminated. One of the Library’s quietly evocative items is a collection of loose recipes collected by a Mrs Turnbull in the mid-19th century (MS.5853): internal evidence suggests that in the 1820s she had been in India, but was now resident back in Surrey. The recipes, for things such as Dhall Bhât (MS.5853/86) or “Colonel R’s curry” (MS.5853/91), speak of old India hands swapping recipes and of memories of the Subcontinent kept alive by cookery. It can surely only have been nostalgia that led her to preserve the recipe for a lethal compound to be spread on furniture as a preservative against termites, which has as one of its ingredients “1 quart of the worst Bazar Mustard” (MS.5853/85); unless Surrey has changed beyond all measure in the last 150 years.

3 comments on A Friday night curry