Item of the Month, November 2009: The journals of Arthur Wellington Clah 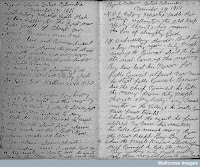 The journals of Arthur Wellington Clah (1831-1916) – Christian missionary and First Nations hereditary Tsimshian chief – are perhaps one of the more unexpected treasures of the Wellcome Library. Written over fifty years, from 1859 to 1910, they comprise a uniquely personal meditation of social change drawn from the tumult of European imperial adventure.

Clah grew up on an islanded bay on Canada’s northwest coast. Dense forests of cedar and pine massed behind, cut through with rivers that flowed from the glaciers of the mountain interior. These were the heartlands of the Tsimshian people, who had first come into being when the trickster, Raven, stole the light of the world from the Great Chief of the Sky and lifted darkness from the land. They grew rich on the natural wealth of their forests and waterways, and developed astounding artistic and ceremonial traditions. However, by the nineteenth century, this wealth had begun to attract the attention of European traders and in 1831 – the year of Clah’s birth – the Hudson’s Bay Company founded a trading station in the bay where Clahcame to live. Named Fort Simpson, its arrival transformed the Tsimshian.

The above painting by Frederick Alexcee, a Tsimshian contemporary of Clah, shows Fort Simpson as it was three or four decades after the arrival of the Hudson’s Bay Company. Around the Company’s white fort the large wooden houses of the Tsimshian cluster, each decorated with painted fronts and carved totem poles. The majority of Tsimshian tribes had soon moved to Fort Simpson, to take advantage of the trade opportunities close proximity offered. Groups that were scattered now competed for social position. The greatest status was granted to those who could give away or destroy the most goods in public feasts named potlatches, and in the clamour for position increasingly extravagant potlatches came to be held. Victorian observers, shocked by such apparent waste and perturbed by lavish ceremonies involving the manifestation of animal spirits, decided the higher blessings of civilization should be called upon. And so in 1857 a young English missionary named William Duncan arrived, eager to bring the Word of God to the benighted of the world.

Clah became a native language instructor to Duncan and, in turn, Duncan taught Clah to read and write English. Clah was one of the first converts of Duncan’s hugely successful mission, which was to lead to the founding of a separate Tsimshian Christian community in Alaska named Metlakahtla that still exists to this day. Clah took up missionary work himself, preaching to villages deep in the forests of Canada and far north in the Alaskan tundra. Such ventures are recorded in his journals, which take the form of a highly personal history of the Tsimshian people. Everyday observations of the weather and of town life in Fort Simpson and Metlakahtla sit alongside reflections upon his faith and the transformation of the beliefs and practices of the Tsimshian. He writes of the banning of the potlatch and traditional winter ceremonies, and of the interweaving of these customs with the newly adopted Christian religion. Indeed, the old and the new entwine in his words – the light of God carrying the echo of Raven’s wing, the traditional spirit quest robed in the search for salvation – as he seeks to find a place for the Tsimshian in a world unravelled and created anew. [1]

After his death, Clah’s journals were purchased by Henry Wellcome, founder of the Wellcome Library. Wellcome had been a committed supporter of Metlakahtla and regarded Clah’s journals as something of a protogenic testament to literate cultural progress. What is certain is that, in the words that Clah set down, the great changes the Tsimshian experienced are given powerful and lasting voice.

4 comments on Item of the Month, November 2009: The journals of Arthur Wellington Clah