Our identity at our fingertips?

What can you deduce from these handprints about the identities of their authors? 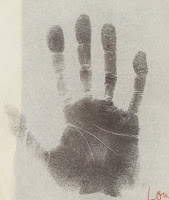 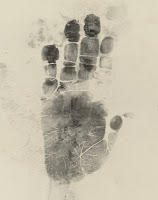 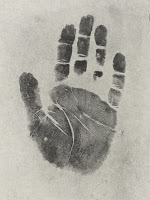 If you need to brush up your palm-reading skills, try dipping into the archive of Dr Charlotte Wolff, a German psychotherapist and sexologist who in the 1930s embarked on a mission to place chirology (the study of hands) on a firm scientific basis.

Wolff was born in 1897 in West Prussia and for a while practised medicine in Berlin, but as a Jewish lesbian with a rebellious streak she was destined for Nazi harassment and had to flee Germany in 1933. She initially earned her living in France and England by reading hands (her 1936 book Studies in Hand Reading reads like a celebrity A-list), but in 1937 became a permanent resident of England and practised as a psychotherapist in various psychiatric institutions.

Here she developed her own theories of psychological diagnosis based on the features of the hand. By conducting comparative researches into hands of ‘normal’ and ‘mentally defective’ children and adults, she came to believe that the hand is the most reliable means of gauging temperament, character and intelligence – in other words, that our hands can be decoded as the ‘DNA’ of our mental states.

The language used in Wolff’s research is shocking nowadays – The Hand in Psychological Diagnosis (1951) routinely describes her subjects as ‘feeble-minded’, ‘high / low grade imbeciles’ and ‘idiots’. The arrangement of her personal archive also produces some uncomfortable juxtapositions. Her 1938-1940 series of handprints, for example, is grouped into Boxers, Chimpanzees, Children with Down’s Syndrome, and Primates.

We have to remind ourselves that Wolff was using the formal terminology of her times, and that her research into identifying the ‘normal’ and ‘abnormal’ reflected widespread contemporary concerns about mental degeneracy, and increasing attempts by the state to care for and control children with mental impairments.

But Wolff’s classifications worry us today because they are so suggestive of the ways in which Charles Darwin’s theory of Natural Selection became horribly tangled up with social policy over the course of the 20th century. One can’t help wondering how many individuals were consigned to psychiatric interventions on the basis of her theories.

And the identities of the three handprints above?

· Bottom: E- B-, a ‘mentally defective’ 11 year old boy (described by Wolff as ‘a little animal, coming from a very degenerated and …primitive family’), 1930s