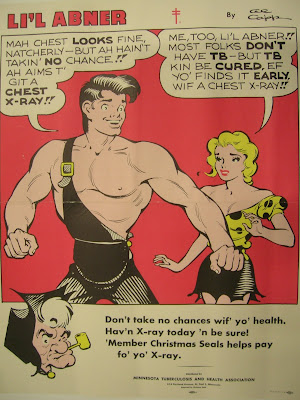 Behind the scenes, the Wellcome Library has been cataloguing a large collection of posters which the Library has gradually acquired over the last couple of years. They are arranged by country of publication (insofar as that can known before they are catalogued), and the most recent tranche to be catalogued consists of sixty-four works from the United States of America. As of today they are available in the Wellcome Library.

The item shown above comes from the state of Minnesota, the state in which the founder of the Library, Henry S. Wellcome (1853-1936), was brought up. This particular work is one which Wellcome could never have seen, for it dates from the 1950s and shows the American cartoon hero Li’l Abner (left) telling his girl friend Daisy Mae that he is about to have a chest X-ray for tuberculosis. The artist Al Capp controlled his own rights and used them to support several good causes, in this case the Minnesota Tuberculosis and Health Association. The poster bears their imprint and their address at 614 Portland Avenue, St. Paul 2. 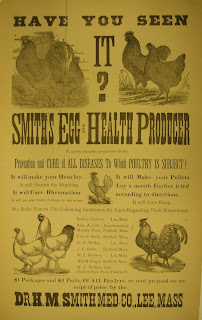 The earliest work in the present group is probably this one (left), thought to date from the 1890s. Dr. H.M Smith Medical Company of Lee, Massachusetts, offers to chicken-farmers its product “Smith’s egg and health producer. A purely scientific preparation for the prevention and cure of all diseases to which poultry is subject!”. It will “make your hens lay. It will hasten the moulting. It will cure rheumatism. It will make your pullets lay a month earlier if fed according to directions. It will cure roup”. (Roup is a disease of chickens, not a misprint for croup.) It appears to be produced by letterpress printing with inserted (pre-existing?) wood engravings, a method that had already disappeared for mass-printing of posters in large cities (in favour of lithography) but might allow small sheets to be printed on the same presses that small-town newspapers were printed on: this is a relatively small poster (sheet 56 x 34.3 cm or 22 x 14 inches). It lists the addresses from which testimonials can be obtained, allowing us to narrow down its catchment area to a very small region of farmland in the Berkshires (south-western Massachusetts and north-western Connecticut). 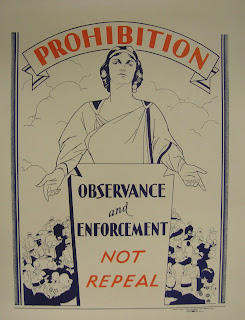 One of the great American health and social causes of the 1920s was Prohibition, which lasted from 1919 to 1933. The present group includes fourteen posters on the pro-Prohibition side (and none on the other side). The largest group among the newly catalogued items was produced in Westerville, Ohio (“The Dry Capital of the World”), by The American Issue Publishing Company, which was the holding company for the Anti-Saloon League, a massive and well-organized pressure group. In fact its printing and publishing industry made it the largest employer in the city. However this lithographic poster (above) of a woman preaching Prohibition to a crowd of well-dressed American citizens was published by yet another formidable pressure group, the WCTU (Woman’s Christian Temperance Union) at its publishing house in Evanston, Illinois. The watchword “Observance and enforcement not repeal” upholds the WCTU’s stance against the opposition, in the form of the AAPA (Association against the Prohibition Amendment) and the WONPR (Women’s Organization for National Prohibition Reform). The struggles of these factions are recorded in the copious literature on the episode. [1]

The collection of film (movie) posters includes a number of now forgotten comedies and romances, perhaps of more interest to today’s historians than they were to their original audiences – although one of them, Tammy and the doctor (1963) elicited the comment on the Internet movie database, “I am a teenager and with all the junk out on television today this comedy/romance was refreshing”. The example reproduced here advertises a film from 1939 in which a (gasp!) woman doctor apparently rescues the life of a sick patient in a “Race with death at 10,000 feet!”. 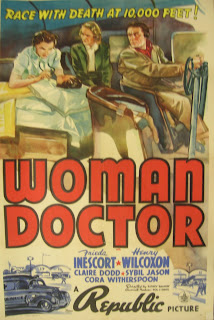 The doctor was played by the Scottish actress Frieda Inescort (Frieda Wrightman, 1901-1976) who moved to Hollywood in the 1930s and later became associated with publicity for multiple sclerosis (she herself had MS).

Another large group in the present lot records the attempts by commercial interests to modify the American diet. The National Livestock and Meat Board in Chicago thought Americans would be more healthy if they ate more meat; dairy companies were anxious that Americans might be consuming too little dairy produce; and the Florida Citrus Commission could be relied on to promote the health-giving value of oranges and grapefruit (even as trimmings for meringues and cream-cakes).

The example below is a novelty poster from 1935 produced in Illinois by the (US) National Dairy Council. Seeing a single digital image of it like the one on the left, one might be puzzled by its message “It’s always breakfast time somewhere”. However, when presented with the item itself one can see that the clock can be set to suit the timetable of the family home (or school, children’s home, holiday camp etc.). Six separate inserts fit into slots in the table: their bases bear the lettering “United States scrambled eggs”, “United States whole grain cereal”, “United States milk”, “United States fruit”, “United States butter”, and “United States toast”.

So if you feel like some “United States scrambled eggs” at 3.50 pm, just set the clock accordingly and you’ll be Okey-dokey. Have a nice day!